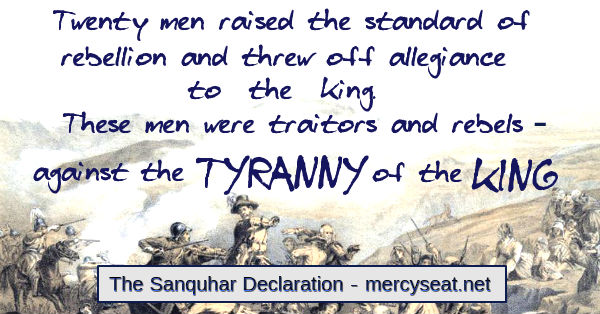 A Declaration posted by the Scottish Covenanters on June 22nd, 1680, wherein they declared war on Charles Stuart, the King of England.

The Declaration and Testimony of the True Presbyterian, Anti-prelatic, Anti-erastian, Persecuted party in Scotland. Published at Sanquhar, June 22, 1680:

On the 22nd of June, 1680, the first anniversary of (the Battle of) Bothwell Bridge, Richard Cameron with twenty men entered the burgh of Sanquhar; and marching in solemn procession, with drawn swords and pistols in their hands, went to the market-cross. When they had sung the words from the psalms of David, Michael Cameron stepped forward and read aloud a Declaration, which he afterwards affixed to the market-cross. These men were disowning Charles Stuart as their king.

In Sanquhar, more than one protestation was publicly made by rebels, but the reading of the Declaration at the market-cross in 1680 was the greatest in historic interest, as being the first scene in the drama of the revolution (called by non-Covenanters, the “Glorious Revolution”) in which the reign of the Stuarts was brought to an end. Twenty men raised the standard of rebellion and threw off allegiance to the king. Twenty men, out of a whole nation, with the forces of the crown to crush them, may appear ridiculous to the cynic smiling at the excesses of political zeal or laughing at the vagaries of religious bigotry. These men were traitors and rebels; but to what cause and to what person? They were traitors against organized tyranny that styled itself the Government of Scotland, rebels against the king in whose name they had been persecuted for abiding that freedom which he had solemnly sworn to preserve.

The scene at Sanquhar was the work of Richard Cameron. His action was rash, if a deed be rash when a man must die for it. Not many were joined with him in it. The Covenanters were all but crushed under the weight of despotism; and there were few with strength and courage to resist. Yet twenty men in Scotland in 1680 threw off Charles Stuart, as the kingdoms threw off James Stuart (James II.) in the year of the Revolution (1688).-(The preceding remarks were written by John Herkless, in 1896, in his biography of Richard Cameron; the text of the Sanquhar Declaration was taken from “Testimony Bearing Exemplified,” 1791. It is interesting to see the assessment of Mr. Cameron by one who was not a Reformed Presbyterian-i.e. a Covenanter.)

The Declaration was framed in these words:

It is not amongst the smallest of the Lord’s mercies to this poor land, that there have been always some who have given their testimony against every cause of defection that many are guilty of; which is a token for good, that He doth not, as yet, intend to cast us off altogether, but that He will leave a remnant in whom He will be glorious, if they, through His grace, keep themselves clean still, and walk in His way and method as it has been walked in, and owned by Him in our predecessors of truly worthy memory; in their carrying on of our noble work of reformation, in the several steps thereof, from Popery, Prelacy, and likewise Erastian supremacy—so much usurped by him who, it is true, so far as we know, is descended from the race of our kings; yet he hath so far debased from what he ought to have been, by his perjury and usurpation in Church matters, and tyranny in matters civil, as is known by the whole land, that we have just reason to account it one of the Lord’s great controversies against us, that we have not disowned him, and the men of his practices, whether inferior magistrates or any other, as enemies to our Lord and His Crown, and the true Protestant and Presbyterian interest in this land—our Lord’s espoused bride and Church. Therefore, although we be for government and governors, such as the Word of God and our covenant allows; yet we, for ourselves, and all that will adhere to us as the representative of the true Presbyterian Kirk and covenanted nation of Scotland, considering the great hazard of lying under such a sin any longer, do by these presents, disown Charles Stuart, that has been reigning, or rather tyrannising, as we may say, on the throne of Britain these years bygone, as having any right, title to, or interest in, the said Crown of Scotland for government, as forfeited, several years since, by his perjury and breach of covenant both to God and His Kirk, and usurpation of His Crown and royal prerogatives therein, and many other breaches in matters ecclesiastic, and by tyranny and breach of the very leges regnandi in matters civil. For which reason we declare, that several years since he should have been denuded of being king, ruler, or magistrate, or of having any power to act or to be obeyed as such. As also we, being under the standard of our Lord Jesus Christ, Captain of Salvation, do declare a war with such a tyrant and usurper, and all the men of his practices, as enemies to our Lord Jesus Christ, and His cause and covenants; and against all such as have strengthened him, sided with, or anywise acknowledged him in his tyranny, civil or ecclesiastic; yea, against all such as shall strengthen, side with, or anywise acknowledge any other in like usurpation and tyranny—far more against such as would betray or deliver up our free reformed mother Kirk unto the bondage of Antichrist the Pope of Rome. And, by this, we homologate that testimony given at Rutherglen, the 29th of May, 1679, and all the faithful testimonies of those who have gone before, as also of those who have suffered of late: and we do disclaim that Declaration published at Hamilton, June, 1679, chiefly because it takes in the king’s interest, which we are several years since loosed from, because of the aforesaid reasons, and other which may, after this, if the Lord will, be published. As also we disown and by this resent the reception of the Duke of York, that professed Papist, as repugnant to our principles and vows to the Most High God, and as that which is the great, though not alone, just reproach of our Kirk and nation. We also, by this, protest against his succeeding to the Crown, and whatever has been done, or any are essaying to do in this land, given to the Lord, in prejudice to our work of reformation. And to conclude, we hope, after this, none will blame us for, or offend at, our rewarding those that are against us as they have done to us, as the Lord gives opportunity. This is not to exclude any that have declined, if they be willing to give satisfaction according to the degree of their offence.

One month to the day after the posting of this declaration, on July 22, 1680, Richard Cameron along with his brother Michael were killed in a battle at Airsmoss.