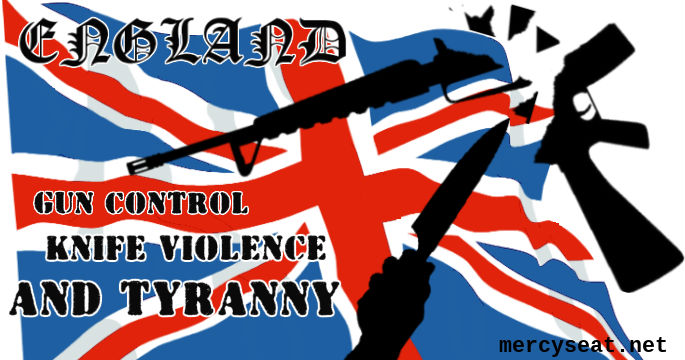 England has long been the poster child of the gun control advocates here in America. They constantly say “we need to do here in America what they have done in England.” England registered all guns and then proceeded to confiscate all guns. Gun control advocates believe that crime will decrease if law-abiding citizens are disarmed. England however, the very nation they love to parade around as a model, has proved them wrong.

The January 16th, 2000, issue of the British newspaper, The Sunday Times, ran a story entitled “Killings rise as 3 million illegal guns flood Britain.” The text reads “Anti-gun campaigners hoped the handgun ban after Dunblane – where Thomas Hamilton shot dead 16 children and a teacher – would reduce firearm crime. The latest figures, however, show crime involving weapons is on the increase.” (full text of the article is included at the bottom of the page). Things are so bad that another British newspaper, The Guardian, called the city of Manchester ‘Gunchester.’ The U.S. Department of Justice has even released figures which show that robbery, assault, and burglary rates are higher in England than they are in the United States.

Read the British newspapers and the Department of Justice report for yourself!

In addition to that, England has become a country dominated by knife violence, as criminals return to more traditional methods to get the job done.  British Home Office states that Britain has become a knife cultureciting four times more knife-related killings as firearms-related killings. The Centre for Crime and Justice Studies at King’s College London recently conducted some deeper analysis of the available Home Office’s statistics, concluding that between 22,000 and 57,900 young people could have been victims of knife crime in 2004. They claim that without better official data it is impossible to know be sure.  Read more on Britain’s knife problem at Freedom Outpost here.

More to the point, though is the fact that down through history, governments have disarmed their citizens only to tyrannize those citizens once they were disarmed.

Up to 3 million illegal guns are in circulation in Britain, leading to a rise in drive-by shootings and gangland-style executions, new figures have revealed.

Police are concerned that the amnesty after the massacre of schoolchildren in Dunblane in 1996, which led to 200,000 weapons being handed in, has failed to dent the underworld’s supply of pistols and revolvers.

The estimate that 3m guns are illegally held in the UK – made by researchers collecting evidence for a parliamentary inquiry into the gun trade – is far higher than previously thought. The vast stockpiles of weapons have fuelled the recent spate of shootings in cities including London, Birmingham and Manchester, where a 17-year-old was killed last week.

Research suggests that in some areas a third of young criminals, classed as those aged 15 to 25 with convictions, own or have access to guns ranging from Beretta sub-machineguns to Luger pistols, which can be bought from underworld dealers for as little as £200.

“There is a move from the pistol and the shotgun to automatic weapons,”

“We are recovering weapons that are relatively new – and sometimes still in their boxes – from eastern European countries.”

In London there were more than 20 fatal shootings last year allegedly Linked with the Yardies, gangsters who have their roots in Jamaica, compared with nine killings in 1998. In one, Andy Balfour, 32, was shot with a Mac 10 sub-machinegun, which can fire 20 rounds a second. He was hit eight times. Last July Tim Westwood, a BBC hip-hop disc jockey, was shot by a man who opened fire on the car in which he was travelling in Kennington, south London.

Killings in Manchester included the death last week of Gabriel Egharevba, 17, who was shot by a man on a motorbike in Longsight. It was the eighth fatal shooting in the city in seven months.

In April 1998 two youths aged 14 and 17 were shot in the same area by a gang with automatic machineguns. Detectives say modern weapons are fast becoming fashion accessories among young drug dealers protecting themselves and their territory. Unarmed officers say they risk confronting teenagers on mountain bikes brandishing automatic weapons.

In Birmingham there have been about 100 crimes a month involving firearms since last March, compared with 88 a month in the year ending in April 1998. Two men were shot dead in Birmingham in separate incidents at Christmas.

Anti-gun campaigners hoped the handgun ban after Dunblane – where Thomas Hamilton shot dead 16 children and a teacher – would reduce firearm crime. The latest figures, however, show crime involving weapons is on the increase.

There were 13,671 armed offences compared with 12,410 the previous year. Experts, however, believe that only half the weapons used in armed incidents are genuine firearms, the others being imitations.

Opponents of the handgun ban implemented after Dunblane say it has failed to cut gun crime because of the multiple sources of weapons available to the criminal underworld. Firearms experts say more research is needed to assess the source of the weapons accurately.

Kate Broadhurst, a researcher at the Scarman Centre, said:

“Controls on legally held firearms are clearly unlikely to have much of an impact.”

Customs officers do not believe smuggled guns account for the bulk of criminal weapons. Criminals instead rely on reactivating decommissioned guns, such as the 9mm Uzi or MAC 10, or supplies from corrupt dealers. Home Office officials insist the legislation has cut off an important supply of guns to the underworld. They say the handgun ban was never intended to combat firearms-related crime, but was a direct response to Dunblane, which involved legally held handguns.

“It is lunatic that a handgun ban was imposed which even the Home Office accepts won’t reduce crimes involving firearms.”

“It’s not the criminals that have suffered, but legitimate gun users and gun traders.”

(from The Sunday Times/London Times circa 2000)

The Guardian: Killings put ‘Gunchester’ back on crime map