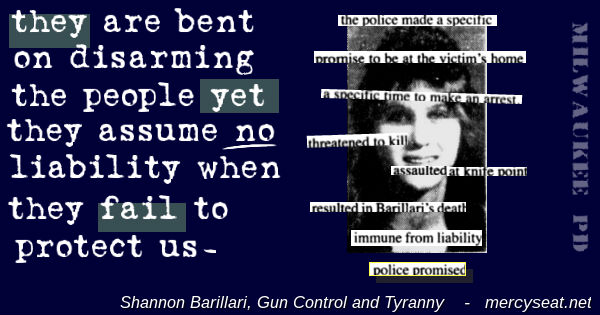 This government, particularly the federal government, seems hellbent on disarming the American people so that we cannot defend our families and our property. This government wants us to rely upon them for our protection. Yet, this same government does not want to assume any liability when it fails to protect us.

Read about Shannon Barillari who was murdered right here in Wisconsin.

Read about the case law in American jurisprudence which makes it clear that the State cannot be held liable for failing to protect its citizens in the book Dial 911 and Die by Richard W. Stevens, attorney at law.

Bet Your Life On A Promise?1

Shannon Barillari had been dating Charles Estergard for about two years, but tried to break off with him in July 1987. Estergard responded by threatening to commit suicide, and on July 29, he sexually assaulted Shannon at knife point. To avoid further harm, Shannon told Estergard she would move in with him the following day, and that he should pick her up at her mother’s house. 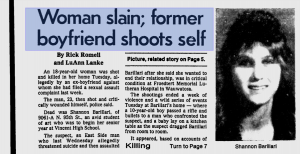 The next morning, July 30, Shannon told her mother and her sister about the assault, then went to the hospital where doctors examined her, and the police took photographs of her injuries as evidence for charges against Estergard. Shannon’s mother told the police that she feared Estergard would again attack Shannon. The police detective promised that Estergard would not get near Shannon because the police would immediately obtain a warrant for his arrest and would capture Estergard when he came to Shannon’s home that

The police detective started the legal processes necessary to get authority to arrest Estergard. Estergard, however, did not show up and was not arrested on July 30. The following day, after meeting with Shannon and her mother, the as
sistant district attorney decided to give Estergard a few days to turn himself in.
Estergard was not arrested and did not turn himself in. On August 4, 1987, Estergard went to Shannon’s house. He first shot Shannon and then himself.

Shannon’s family sued the city (as employer of the police department and officers) for negligence. The family argued that the police detectives hadpromised to arrest Estergard or to tell the family that he had not been arrested. also, the family had previously planned to leave the Milwaukee area so they could avoid Estergard’s threatened violence, but because they relied on the police assurances the family stayed in town.

Under Wisconsin law, however, Shannon had no enforceable right to police protection. The detective’s promise to arrest Estergard was not binding. The family’s reliance on the assurance of protection was worthless. Thus, her family was not allowed to sue for damages arising from police failure to protect Shannon.

The Supreme Court of Wisconsin explained why the police could not be liable for protecting individual crime victims:

“We look to our police departments to enforce our laws and to maintain order in what is becoming an increasingly dangerous society. Routinely, police face critical situations, many of which have the potential for violence. On a typical day, any given law enforcement officer may be arresting and questioning suspects, interviewing and counseling victims, talking to witnesses, rescuing children, and investigating criminal activity. In the course of their work, police must often try to console and reassure people who are distraught and fearful. Faced with escalating violence, they must continuously use their discretion to set priorities and decide how best to handle specific incidents. Police officers must be free to perform their responsibilities, using their experience, training, and good judgment, without also fearing that they or their employer could be held liable for damages from their allegedly negligent discretionary decisions.” Barillari, 533 N.W.2nd at 764-65.

The Wisconsin Court admitted that the state and local governments cannot adequately protect their citizens, even when the police know who the violent criminals are and whom they have threatened to hurt. The police cannot do the whole job, the Court said, and should not be liable for damages when they negligently fail.

The Court offers no help to citizens in danger, and no compensation for those victims killed or injured by criminals. Meanwhile, “gun control” laws discourage people from owning and using firearms to protect themselves. Had Shannon Barillari been armed when Estergard came to her door, would she have had a better chance of being alive today?

Read bout the case brought before the courts by Shannon Barillari’s parents, and its subsequent dismissal, here.