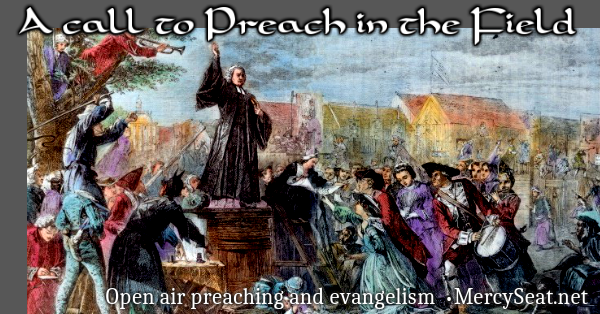 Church history is important to a Christian’s mind. I’m amazed however at how many know very little of it. Case in point: George Whitefield.

George Whitefield was a central figure in the Great Awakening our nation experienced back in the 18th century. He preached in the open field throughout the colonies. He often preached to crowds of thousands. It was said by historic contemporaries that he could preach to a crowd of 30,000 people (without amplification of course) out in the open air and all could hear.

Many people have the faulty idea that – when George spoke everyone in the crowd was hanging on his every word. That the crowd was silent, just waiting to hear what he would say next. Nothing could be further from the truth. He regularly ran into hecklers and brutes who would try to disrupt his preaching so that others might not hear the Word of God being declared.

I have a painting in my home from the early 1800’s of George Whitefield preaching at Moorsfield, London. In the painting, Whitefield stands on an oak barrel and a crowd is gathered to hear him preach. But out in the crowd you see a man beating a drum to distract the hearers. Behind Whitefield, another man has climbed the tree and is blowing a horn directed towards Whitefield’s head. Next to Whitefield, a man has set up dressed as a court jester and out in front of Whitefield a woman sits perched atop a stepladder reading a book. Meanwhile, another man is seen in the crowd trying to get to Whitefield to push him off the barrel with a stick.

This is often as things are when one decides to streetpreach or preach in the open air. Everyone is not sitting in nice pews hanging on your every word.

In this day and age of churches being hell-bent on doing all they can to serve up consumer-friendly Christianity, anyone standing out in the open raising their voice and declaring the truth of Scripture, calling people to repentance, seems coarse and wrong.

Gentle and non-offensive Christianity is in vogue these days. Many falsely believe you must establish a relationship with someone before your declaration of the Gospel can have legitimacy. Those who dare preach in the field these days are almost always criticized by the church and Christians in general.

Having traveled to more than 60 universities to preach, we are routinely accosted by Christians who tell us what we are doing is all wrong. The Christian students think we are wrong because things are often not peaceful when we preach because of hecklers and other opponents of God’s Law and Gospel. They believe the Lord could not possibly have His hand in such matters. They believe that surely when Whitefield preached, the people were quiet, hanging on his every word. The painting in my house and the accounts written tell a very different picture however.

I often think to myself when talking with these Christians – “Have they ever read the Gospels or the book of Acts? Did they not read the accounts of the tumults that often took place when Jesus or the apostles preached in the open field or streets?”

The truth is Whitefield was criticized by the churches and Christians of his day for the very same reasons. They could not believe God could be involved in such an often tumultuous venue. They would do well to read the accounts of Whitefield’s preaching and the diary of John Wesley.

There is no doubt that there are some who preach in the field in our day whose declaration and demeanor is less than desirable. Some are even outright nuts. But this is no reason to dismiss streetpreaching out of hand. Preaching in the field and out on the streets is biblical. Not only did Jesus and the apostles demonstrate this practice, but throughout church history many men of God have preached in the field and on the streets.

It is part of the heritage of the Christian Church.

Whitefield won thousands to Christ and changed the course of our nation through his evangelistic efforts, the hallmark of which was field-preaching. I would like to invite you to consider being a student at a school of evangelism here in Wisconsin. Faithful Soldier School of Evangelism will be conducting a 90 day training camp beginning in September. You can visit their website at www.FaithfulSoldier.com to learn about the school.

“What marvel the devil does not love field-preaching? Neither do I: I love a commodious room, a soft cushion, a handsome pulpit. But where is my zeal if I do not trample all these under foot to save one more soul?”
~John Wesley