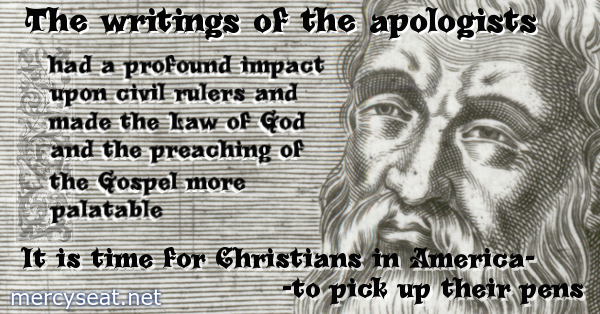 A popularly held belief amongst Christians in America is that the early church had nothing to do with politics. Nothing could be further from the truth. Even a brief perusal of the writings of early churchmen known as apologists, reveals that almost all of their writings were directed towards the State. They were written to Roman government officials; to the rulers of that day.

Their writings made a rational appeal to the pagan leaders and aimed to create an intelligent understanding of Christianity. They did not just rely on reason and nature, however. Rather, they looked to the Scriptures and declared their reasonableness to a pagan world in hopes that they might understand the Scriptures. Their writings were loaded with Scripture!

The earliest apologetic writing that we have, written about 140 A.D by Aristides, was addressed to Emperor Antoinus Pius, his sons, the Roman Senate, and the entire Roman populace. The foremost apologist of the second century was Justin Martyr. He lived between 100-165 A.D. His first apologetic, written in 150 A.D., entitled First Apology, was addressed to Emperor Antoninus Pius. Athenagoras, whose apology, A Plea for the Christians, was written in 177 A.D., was addressed and presented to the Emperors Marcus Aurelius and Lucius Commodus. Well-known church father, Tertullian, addressed his Apology to the Roman governor of the province in which he resided.

Again, all this flies in the face of the popularly held belief that the early church had nothing to do with politics. The truth is they wrote to the civil magistrates of their day to convince them of the legitimacy of the Christian faith; to refute the false charges that pagan neighbors and writers leveled against Christians; declare God’s Law and Gospel; and to show that in contrast to Christianity – pagan religions and state worship were foolish and sinful.

What prompted the writings of the apologists? Persecution. The early church was at first viewed by the Roman government as being a Jewish sect. Therefore the church was regarded as religio licita – a legal sect. Persecution was sporadic and isolated. By the beginning of the second century however, the authorities had come to see that the church was separate from Judaism and therefore was officially labeled religio illicita – an illegal sect. The writings of the apologists began soon after.

Given the fact that we clearly live in a post-Christian culture, I cannot stress strongly enough how important it is for us to begin to write and think like the apologists. As the laws of the State more and more reflect an anti-Christian bias, it is important for Christians to write to the civil rulers of our day in defense of the faith. We must not ignore civil magistrates as so many in American Christendom are wont to do under the guise and false belief that – “the early church never had anything to do with politics.” The early church did have something to do with politics. The early church did not ignore the civil magistrates. They wrote in order to effect public-policy, and so must we.

The writings of the apologists not only had a profound impact upon the civil rulers and their governance, but their writings were also instrumental in seeing civil rulers and others won to Christ; attitudes towards Christianity changed; and minds made more palatable to the Law of God and the preaching of the Gospel.

It is time for Christians in America to pick up their pens – and begin to write.

You can find a pdf of this article here.

NOTE: Apologist Justin Martyr established a school in Rome for young men who were interested in winning men to Christ and defending the Christian faith.

The Faithful Soldier School of Evangelism conducts 90-day training camps wherein classes and studies in Christian Apologetics are part of the curriculum. To learn more about this school, go to http://www.faithfulsoldier.com/