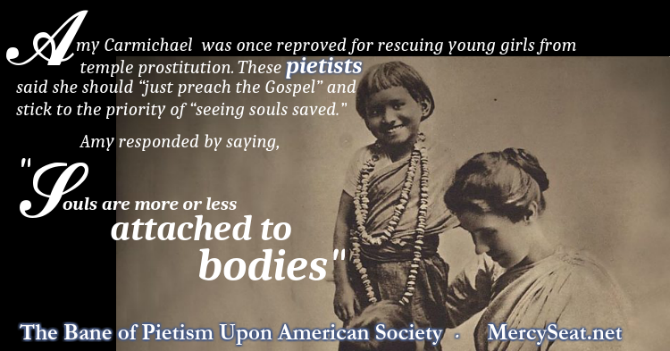 Many Christians have attacked our efforts on behalf of the preborn over the years. This happens because much of American Christianity is rooted in Pietism. Pietism thinks that Christianity only affects the inward or the personal.

The Pietist believes Christianity should be a private matter and should withdraw from the public square and public policy. The Pietist believes that the “only solution” for the ills of society is to “just preach the Gospel,” therefore trying to stop abortion is a waste of time.

The “We should just preach the Gospel” slogan is designed to neutralize any Christian who wants to get involved in seeing good law established or wants to defend the preborn. The question we ask is: Have you ever used the bathroom? Do you brush your teeth? Do you spend time with your wife? Take your kids for a walk? Our point is that no one just preaches the Gospel.

Further, did you ever notice when this slogan is heralded? When the latest potluck is announced or the church softball team is being formed or the latest musical event is getting organized – you never hear anyone jump up and say – “we should just preach the Gospel!”  The ONLY time they say it is – again – when some Christian wants to see good law established or wants to defend the preborn.

The Pietist believes that “we should just preach the Gospel” because once a majority of people get saved – so their logic goes – only then will there be a change for good in the culture and laws. The problem with this view is that Jesus said narrow is the way that leads to life and few there be that find it (Mt. 7:13,14). Hence, those who truly convert to Christ will always be in the minority – a small minority. The “we need to get the majority of people saved and hearts changed and then we’ll see the laws of the land change” idea is simply not true.

The Pietist also says that we’re amiss in telling people not to kill their babies because “we should expect sinners to act like sinners.” In truth however, that sinners will act like sinners is precisely why we need good laws in our nation. The moral law of God is For sinners. (I Tim.1:9-11) Law restrains men from doing wrong or evil, and punishes them when they do. It does not make men good – only the Gospel does that. But it does restrain men from doing evil. Remove all laws tomorrow and you’ll soon see what a restraining affect law has on men, as societal lawlessness would soon result.

Christian men once understood this important matter. This is why the Law of God was the “higher law” which all nations in Western Civilization upheld and were accountable to for nearly 1500 years. Christians over the last 150 years however, have thrown the law of God under the bus, and justify it all by glibly saying “I expect sinners to act like sinners.” The result has been the rule of law is crumbling in America and all of Western Civilization.

The moral law of God not only benefits men at a personal level – shows men they are sinners in need of a Savior – but it also benefits men at a societal level. It is objective truth to which all are accountable – all men and all governments of men.

I read a Pietist just this past week – he said a classic Pietist motto – “God doesn’t call the church to address the symptoms of sin.” Over the years, I have had many Pietists tell me I was wasting my time trying to defend the preborn because I was just addressing the symptoms of sin. The particular symptom this Pietist was writing of in his article was about people being poor.

And when it comes to protecting the preborn threatened with murder – is their killing a mere symptom of sin? What if a man broke into the Pietist’s house and was raping his wife – would he stand there, tap him on the shoulder, and inform him that what he is doing is merely a symptom of sin? Would he ask the man to perhaps break off for a moment so he could share the gospel with him?

The murder of the preborn by abortion is not just some symptom of sin – these are real human beings threatened with a brutal death – and we stand by and do nothing? And justify it theologically in our minds with –“ah, that’s just the symptom of sin”?

Amy Carmichael, missionary to India, was once reproved by her supporters for rescuing young girls from temple prostitution. They told Amy that she should “just preach the Gospel” and stick to the priority of “seeing souls saved.” Amy responded by saying, “Souls are more or less attached to bodies.” She understood it was not an either/or.

Are we saying that preaching the Gospel isn’t important? No. We have simply learned that defending the preborn grants us many opportunities to declare the Gospel to people! It is not an either/or. We can walk and chew gum at the same time. All the literature Missionaries to the Preborn produces includes a Gospel message.

Hearing the simple message of the Gospel; turning from your sin; and believing in Jesus is the only way for salvation – that we affirm and practice. But when the Pietist says that preaching the Gospel is the only solution for change in the culture – that we deny and prove to be false.

A pdf file of this article is available here.