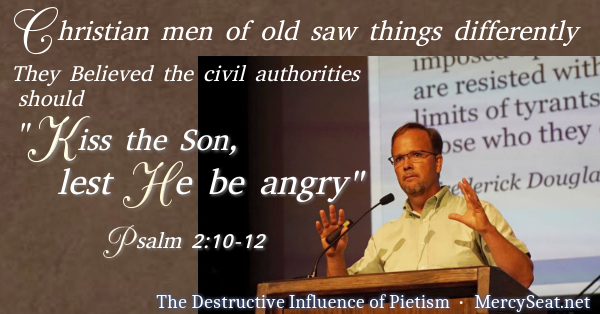 Many in American Christianity like to use great swelling words about revival – “a national revival” – as being the only means whereby the ills of our nation will be reversed or cured. But I submit to you, that even if there were a great revival in this nation, we would not see any of the change in the hearts of men translated into a change in America’s laws.

The reason there would be no change is because American Christianity is rooted in and wed to Pietism. Pietism, as a movement, originated in the late 17th century, and was what some saw as a reaction to the cold orthodoxy that had settled in 150 years after the Reformation started. Pietists viewed Christianity as being prevalent within Western culture, but believed they saw little of it evident in people’s personal lives.

Pietism therefore went to the other extreme and taught that Christianity should only affect the personal. Pietists believe Christianity or God’s Law has no place for the governance of society. They view involvement in public policy matters to be “unspiritual.” Hence, the Pietist is constantly preoccupied with checking their motives, and listening to countless sermons on inter-personal relationships and self-improvement techniques.

Pietism was developed amongst the Lutherans, impacted the Calvinists, and became prevalent amongst the Baptists. Pietism went on to infect every area of Christianity. Present day American Christianity is Pietism.

We are now seeing, in our day, the results of a Pietistic Christianity. Because the Pietists retreated from the culture, the institutions of the culture have been annexed and overtaken by pagan men. So thoroughly have they routed Christianity that their current mopping up efforts consist of not allowing Christmas to any longer be called “Christmas.” The Pietist, who has continually retreated for over 200 years, has now made his stand there in defense of Christmas, not realizing that it is his form of Christianity that has brought us to this point.

And this is my point – even if there was a great revival – there is no theological means within present day American Christianity whereby biblical morality could become public policy. There has to be a fundamental change in the form of Christianity in America in order to see it happen. American Christianity not only has no desire to see the law of God fleshed out in American jurisprudence – it is literally incapable of doing so.

We have been skating on the coattails of Christian men who established what is known as Western Civilization for over 200 years now. The ‘rule of law’ for nearly 1500 years has been God’s Law in Western Civilization, not by chance, but because Christian men made it so. We are now witnessing the collapse of the ‘rule of law’ in our day. We can thank the Pietists, in all their spiritual pride and Gnostism, for it.

Scholar and historian, Steven Ozment, in his book Protestants: Birth of a Revolution, said that the Protestant Reformers understood that “Reform that existed only in pamphlets and sermons, and not also in law and institutions, would remain a private affair, confined to all intents and purposes within the minds of preachers and pamphleteers.”

Pietism is why The Barna Group recently found that 80% of Christians do not know how to apply their Christianity to their everyday life. This is because Pietism fragments everything between the so-called “spiritual” and the “unspiritual,” and thinks God’s Word doesn’t have anything to say about law, government, economics or education, which results in the individual Pietist conforming to every area of American life because he views Christianity as not being applicable to his everyday life and every area of life.

I recently received a flyer in my mailbox from a “bible-believing” church which invited me to hear a “sermon series” about “tension.” This is all Pietistic Christianity has to offer the nation – and this is what one’s Christianity is reduced to by Pietism – a therapy for tension.

Christian men of old saw things far differently. They Believed the civil authorities should “kiss the Son, lest He be angry” (Psalm 2:10-12). They sought to win the magistrates of their day to Christ or to at least respect His rule. They understood that the law of God in society was needed, and that civil government was suppose to be a picture of God’s justice and glory in the earth, causing men to consider matters of eternal salvation.

We are not talking about a socio-political utopia here, as the nature of man forbids it. I can assure you however that when Christian men of old found themselves in a dire situation, they didn’t open up their prophesy charts and begin to examine them. Rather, they picked up their Bibles and looked to construct a Christian society. May the Lord grant us the grace to do likewise.

Listen to sermons on pietism here.