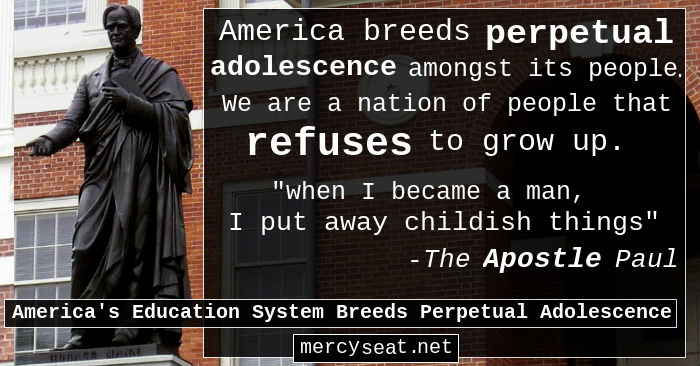 It is my contention that America breeds perpetual adolescence amongst its people. We are a nation of people that refuses to grow up.

At the founding of our nation, children’s essential schooling ended at age 13. They then either went into a trade or went on to college. If they did go to college, by the time they were 18, they were entering their field.

Now, in America today and for the last 70 years, we have what’s called ‘secondary education’ or ‘high school’ education. Children, rather than taking on responsibility and moving into their trade or field, spend four more years, the years of 14-18 sitting at a desk learning more information (though they are clearly dumber than ever).

There were no secondary schools during America’s Revolution era. In fact, at the beginning of the 1900’s only about 10 percent of Americans attended what had become to be known as secondary or high school education. A huge push commenced by the Statists and teacher unions of that time however, resulted in secondary education becoming a standard part of the American education system by the mid 1900’s.

Young people now have to complete high school before going off to college or starting a trade. Thus perpetuating adolescence.

After four years of ‘high school,’ the young person finally goes off to college only to spend the first two years relearning everything they learned during the last four years. Then – and only then – are they finally able to study what they are actually interested in!

I remember when I was 14 and older feeling incarcerated at high school. Trapped. I wanted to move on with things that I was interested in. And every young person should be able to do so whether through learning a trade or beginning college. Instead, every young person is forced to stay at the desk learning about things they have no genuine interest in.

This breeds conformability and kills independent thought, creativity, and self- initiative.

Our American education system breeds perpetual adolescence. Young people are never allowed to grow up. To risk. To achieve. To use their unique gifts to the glory of God and the good of society. Rather, our education system kills the desire to mature, to take on responsibility, to expand one’s worldview, and prepare for manhood and womanhood.

College for most young people is a big playtime. Mom and Dad (or the State) foot the bill while they continue to school and delay their maturing process. Hence, young people are in their early 20’s before they are finally allowed to mature and take on responsibility. They are denied and delayed their natural desire to do so nearly ten years earlier in their life because of our education system. Adolescence is perpetuated ad nauseam.

I submit to you that we should abolish secondary education in America. Fat chance of that happening however, when so many have their wallets tied to that system. The educrats and teacher unions would never allow it. For them, it is an industry. Nevertheless, this needs to be discussed.

For a print-friendly pdf of this article, click here.

For a fuller discourse on this topic, listen to the sermon “The Ill Affects of Perpetual Adolescence on American Society.“