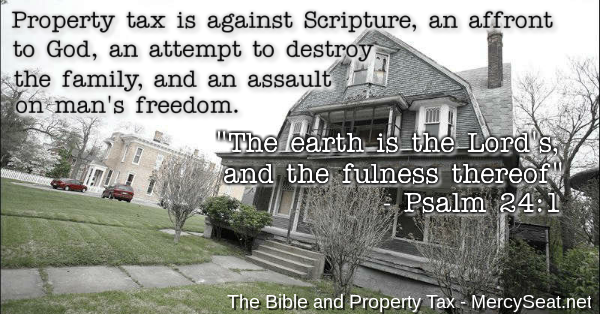 The Scriptures address all matters of life – including land matters. The property tax is an evil which the Scriptures speak against and which pulpits across this nation should denounce. Let me prove this to you.

Exodus 9:29 Moses declares to Pharaoh (who I’m sure thought he owned the land) “As soon as I have gone out of the city, I will spread out my hands to the Lord; the thunder will cease, and there will be no more hail, that you may know that the earth is the Lord’s.”

Psalm 24:1 “The earth is the Lord’s and the fullness thereof, the world and those that dwell in it. For He has founded it upon the seas, and established it upon the waters.”

Leviticus 25:23 God is establishing various laws regarding land and He says to the Israelites “The land shall not be sold permanently, for the land is Mine; for you are strangers and sojourners with Me.”

The land belongs to God, not the State. A property tax is the State declaring that it owns the land, and worse than that, it is the state attempting to usurp the place of God by saying it owns the land.

The property tax is an unbiblical, evil tax.

#1. The property tax is an unbiblical, evil tax because the Bible no where grants the State jurisdiction to impose a property tax.

Nothing more needs to be said – no where does the Bible grant the State jurisdiction to impose a property tax.

#2. The property tax is an unbiblical, evil tax because it dispossesses and disinherits the family.

Land, in God’s economy, was meant to be an inheritance to future generations of family members. Dt. 19:14 and Lev. 25 make this abundantly clear. A tax on the land is an attempt by the state to defund, dispossess, and disinherit the family. Families that cannot afford the tax will lose their land! Supreme Court Chief justice John Marshall, penned these words in the 1819 McCulloch v. Maryland case, “The power to tax is the power to destroy.” A property tax is an attempt by the State to destroy the family!

God intended for families to own land. He intended the land to be an inheritance to future members of the family. Any laws which the State enacts to see this end accomplished are just laws, any laws which militate against this God-given design are unjust laws. The land owned by families should not be taxed by the State, lest they rob future family members of their God-given inheritance.

The property tax enslaves a man and reduces him to a serf, and this is an assault on a man’s freedom.

That God views the property tax as an assault upon man’s freedom is evidenced by Holy Scripture. For example, in I Samuel 8:14-15, God, speaking through Samuel, tries to convince the children of Israel that they do not want a king like all the other nations. One of the reasons He uses to try and convince them of this is an indirect property tax.

#1. Property tax is wrong because of what it is used for.

It’s hard to determine what the state uses its portion for. The county government usually uses a large portion of the small portion it receives for jails and prisons. These are unbiblical institutions as the Lord demanded retribution and restitution in His economy.

The local government uses the vast majority of what it keeps for schools! This is another unbiblical institution. In the Bible, the State is never granted jurisdiction to educate children.

So, property tax is wrong because of what it is used for.

#2. Property tax is wrong because it removes incentive to improve one’s property.

#3. Property tax is wrong because it violates our state constitution here in Wisconsin.

Article 1, section 14 of the Wisconsin Constitution says “All lands within the State are declared to be allodial, and feudal tenures are prohibited.”

What is “allodial?” The 1828 dictionary, which is close to the time of the writing of the Wisconsin Constitution defines ‘allodial’ as “pertaining to allodium.” And how is allodium defined? ‘Allodium’ is defined as “Freehold estate; land which is the absolute property of the owner; real estate held in absolute independence; without being subject to any rent, service or acknowledgement to a superior. It is thus opposed to feud. In England there is no allodial land, all land being held by the king; but in the United States most lands are allodial.” There it is. The land does not belong to the State (its not the king’s) but to the property owner, to families, as God intended.

Property tax is against Scripture, an affront to God, an attempt to destroy the family, and an assault on man’s freedom. We should be opposed to it therefore.

The reason Americans are under the oppressive property tax is because we are a nation of citizens in rebellion to God and because the American Church is acting as an idolatrous prostitute. We must not allow the State to usurp the place of God. We must give Him His proper place and subject ourselves to His Law.

The attitude of the State regarding the taxation of its citizens can be summed up in the words of former U.S. President Lyndon Johnson. In a January 15, 1964 White House speech, LBJ, who gave us the Great Socialist Society, said, “We are going to try to take all the money that we think is unnecessarily being spent and take it from the ‘haves’ and give it to the ‘have-nots’ that need it so much.”

What should we do in light of this tyranny?

Am I saying you should not pay your property tax? No, I’m not telling you to do that, although God may lead some to do so. It may be a cause for which He will raise them up. But what we should do is inform this nation that God is not silent. That he speaks to all matters of life, including the matter of property tax.

The pulpits of this nation should be aflame with righteousness calling this nation to repent of its rebellion and idolatry against God. We should be teaching this counsel from God’s Word which I have declared to you in this pamphlet from pulpits across this nation, so that young people will know it is wrong, and perchance, when they are older they will see this scourge called property tax abolished from our land.