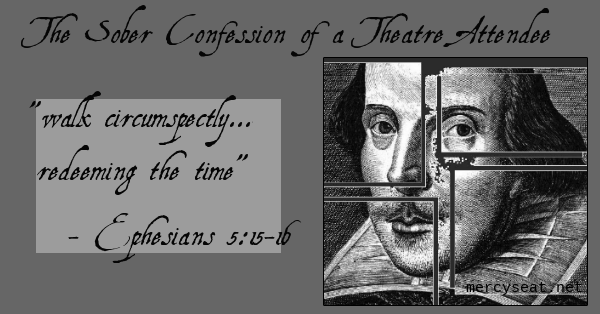 Over the years however, I routinely ran into Christians who went to movies. Even when I went to Bible College, I was beset upon by students when they learned that I didn’t attend theatre. They used many rationalizations and justifications to try to convince me that it was alright. Some who attended theatre were people whom I respected and looked up to. I began to think that maybe movie attending wasn’t so bad after all. I began to think that maybe I was weird or even arrogant regarding this matter.

After three years, I finally wore down and attended theatre. My participation in theatre attendance would grow and wane over the years; but by the time God broke through to my heart and I repented before Him in April of 1999, I was attending theatre about once every two or three weeks and renting a movie almost every week. God had been dealing with my heart for a long time regarding this matter. Yes, I did resist Him and harden my heart over the years, but He faithfully delivered me from the madness.

In May of 1999, I preached a sermon to the congregation which I pastor, Mercy Seat Christian Church. I confessed my sin to them, and asked their forgiveness if I had caused them to think attending theatre was o.k. by my actions. In that sermon, I set forth seven reasons why we should not participate in theatre attending or movie-renting. The following is a brief synopsis of the seven.

1. We should stand in opposition to theatre attending and movie renting because it is a criminal waste of time.
In Ephesians 5:15-16, the Scriptures exhort us to “walk circumspectly… redeeming the time, because the days are evil.”

Samuel Miller, who was the pastor at First Presbyterian Church in New York City, preached a sermon on January 19, 1812, in which he denounced theatre attending. He said regarding this argument:

“I take for granted that this argument will be thought entirely destitute of force, by those children of vanity, who never consider the purpose for which they were sent into the world, or lay to heart the shortness and infinite value of time. But to the man of spiritual wisdom, who remembers that life is short; that there is much to be done; that he has never yet done, either for God or for his generation, a tenth part of what he might and ought to have performed; and that for the manner in which we spend every hour, we must speedily give an account before the judgment seat of Christ; to every one who remembers these things, the argument will carry with it irresistible force.”

May the realization hit you – day after day passes, and how have you spent your life? What have you done? What are all the good intentions of your heart which have never come to pass, that have never been fleshed out in your life? How much of your life will you squander in theatre attending and movie renting?

2. We should stand in opposition to theatre attending and movie renting because it causes dissipation of the mind.
The Scriptures make it clear in Romans 12:1-2 that our minds are not to be conformed to this world. Rather, our minds are to be transformed for service to God! If you think you can consume the thinking of the world by going to theatre and then think clearly in regards to your service for God, you are fooling yourself. You are deceived and deluded.

3. We should stand in opposition to theatre attending and movie renting because it portrays evil as good and good as evil.
Is this not true? For example, the family man is almost always portrayed as a phony hypocrite, while the fornicator is portrayed as the reasonable, noble man. God’s Word says in Isaiah 5:20, “Woe to those who call evil good and good evil.” Hollywood does that!

4. We should stand in opposition to theatre attending and movie renting because we are financing evil when we do so.
What does Hollywood advocate and support? Every sort of evil, filth, and debauchery that one can imagine. Let me just list a few: They advocate and support baby-murder; disarming the American people; every form of immorality and perversion – fornication, adultery, sodomy, you name it; socialism; every presupposition which stands in complete opposition to the presuppositions of Holy Scripture; and they mock and blaspheme our Savior and King. So I ask you, why would you want to give them your money? Don’t they spit in our faces? Don’t they spit in the face of our Lord?

I submit to you that if we attend theatre or rent movies, we are aiding and abetting the enemy. We are committing an act of treason against our King and against His Kingdom.

5. We should stand in opposition to theatre because throughout the history of the Church the Church has stood in opposition to it.
In the Early Church, both the actors and those who attended theatre, were debarred from the Lord’s Table. All the Church Fathers who spoke on the subject attest that this was the case. A number of the early Synods and Councils passed formal canons, condemning the theatre and excluding actors and those who intermarried with them or openly encouraged them from the privileges of the Church. Down through history, you see the Church condemning the theatre. It was not until this century that Christians began to embrace it and unquestioningly attend it.

6. We should stand in opposition to theatre attending and movie renting because of what Holy Scripture declares.
James 1:27 declares that we are to keep ourselves “unspotted from the world.” How do you think you will do this if you are feeding on theatre? Our Lord taught us to pray “lead us not into temptation” (Mt. 6:13). We are going to pray this and then walk into a movie theatre or Blockbuster video? Get real.

7. We should stand in opposition to theatre attending and movie renting because we are at war and an army must stay focused.
This reason is the most important because it encapsulates all the other reasons. An army cannot be frittering its time away. An army must stay focused and not allow the minds of its soldiers to be dissipated so they can do service for their King. An army must believe in virtue, in honor, in good. An army must not give aid and comfort to the enemy. It must not commit treason against its King and His Kingdom. An army must be submitted to the decrees of its King. It must obey His Law/Word.