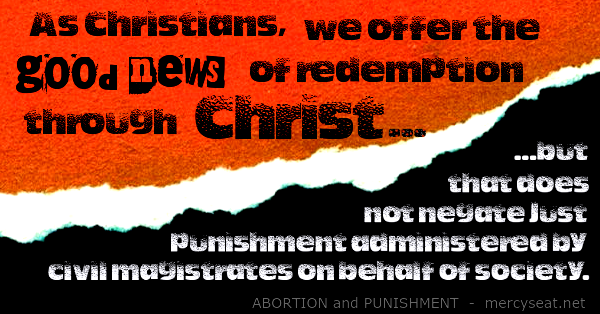 The Roe v. Wade Opinion actually spoke to this

Donald Trump caused a firestorm recently when being grilled by Chris Matthews of MSNBC as to whether there should be punishment for women if abortion is made illegal. Trump, who clearly never thought about this before, said what any rational person would say – “Yeah.”

This caused a chorus of furor from the GOP, Trump’s presidential opponents, countless pro-life/pro-family groups, and every leftist in America.

But what Trump said was a no-brainer.

Any thinking person understands that when something is legislated as a crime, there is a consequence if you commit the crime. If abortion is murder – and it is – the woman should be punished.

But see, the “pro-life movement” in this nation has made the woman into a victim. That’s right – they actually want us to believe that the woman who hires a paid assassin to murder her own child is in fact a victim herself.

There is something absurd about calling abortion the capital crime of murder (as pro-lifers and Christians rightly do), and then saying there should be no punishment for the person who hires a paid assassin to murder their own son or daughter. This moral schizophrenia is an insult to the very nature of justice.

Having stood outside abortion clinics for hundreds of hours, I can assure the vast majority of women coming to murder their children know exactly what they are doing. If it were illegal, they would all be without excuse.

I remember when I was young hearing a Right to Life leader say that abortionists should only be given a ticket the first time they are caught committing an abortion. That statement, coupled with his follow-up that women should receive no punishment at all, left me thinking – so what’s the big deal about abortion?

If those who are opposed to abortion think the penalty should be a ticket and nothing at all, surely the killing of the preborn cannot be that big of a thing. Abortion is just a “not-nice” thing. Do you see the inconsistency between calling abortion “murder” and then stating such penalties for committing such an act?

I can assure you that if you read the comment sections of articles about pro-life/pro-family groups condemning Trump’s statement – you readily see that the wicked see the inconsistency.

Americans United for Life – like National Right to Life and most pro-life/pro-family organizations in America – is an organization who has enriched itself off the bloody backs of the murdered preborn for decades by promoting their endless incremental laws against abortion – while at the same time attacking Personhood Amendments or any legislation that could simply bring an end to the killing immediately.

Not surprising therefore that AUL’s Clark Forsythe has written to convince pro-lifers that women should not be prosecuted. In fact, the pro-life movement has been conducting a nationwide campaign (your donations at work) for years now to remove all anti-abortion statutes off the books in states that did criminalize the actions of the woman – all while promoting the mantra that the woman is a victim.

For example, here in Wisconsin in 2011, after taking office our GOP governor, Scott Walker, along with the majority GOP Assembly and Senate – repealed and gutted all punishment for women in our ages-old anti-abortion statute. This was all done at the behest of Wisconsin Right to Life, NRTL, AUL, and others. What the wicked Democrats couldn’t accomplish for years was accomplished by the GOP and the “pro-life” organizations.

They are spitting on the humanity of the preborn child.

Even The U. S. Supreme Court saw the inconsistency of such non-penalties. Blackmun used the lack of punishment to the woman and the low punishment to the abortionist as proof that the preborn child must not be “a person.”

There are other inconsistencies between Fourteenth Amendment status and the typical abortion statute. It has already been pointed out, n. 49, supra, that, in Texas, the woman is not a principal or an accomplice with respect to an abortion upon her. If the fetus is a person, why is the woman not a principal or an accomplice? Further, the penalty for criminal abortion specified by Art. 1195 is significantly less than the maximum penalty for murder prescribed by Art. 1257 of the Texas Penal Code. If the fetus is a person, may the penalties be different? [Endnote 54]

The Court is pointing out the incongruity of the Texas law. 1.) The 3 to 6-year sentence for the abortionist came far short of the capital punishment proper to anyone convicted of the premeditated murder of another person; and, 2.) the mother is not punished at all.

By refusing to criminalize the actions of the woman and instead labeling her a victim – we undermine both the humanity of the preborn child and the rightly stated argument that abortion is murder.

When we are asked what the punishment should be for women who have illegal abortions, we should unashamedly respond – whatever the penalty is for murder in the state where it takes place.

Of course, as Christians, we offer the good news of redemption through Christ to those guilty of abortion, just as we would any other criminal guilty of a capital crime. But that does not negate the God-given role of the civil magistrate to administer just punishment on behalf of society.

Matthew Trewhella is the pastor of Mercy Seat Christian Church (MercySeat.net). He and his wife, Clara, have eleven children and reside in the Milwaukee, Wisconsin area. You can obtain his book The Doctrine of the Lesser Magistrates: A Proper Response to Tyranny and A Repudiation of Unlimited Obedience to Civil Government at Amazon.com or by going to the websites www.DefyTyrants.com or www.LesserMagistrate.com.