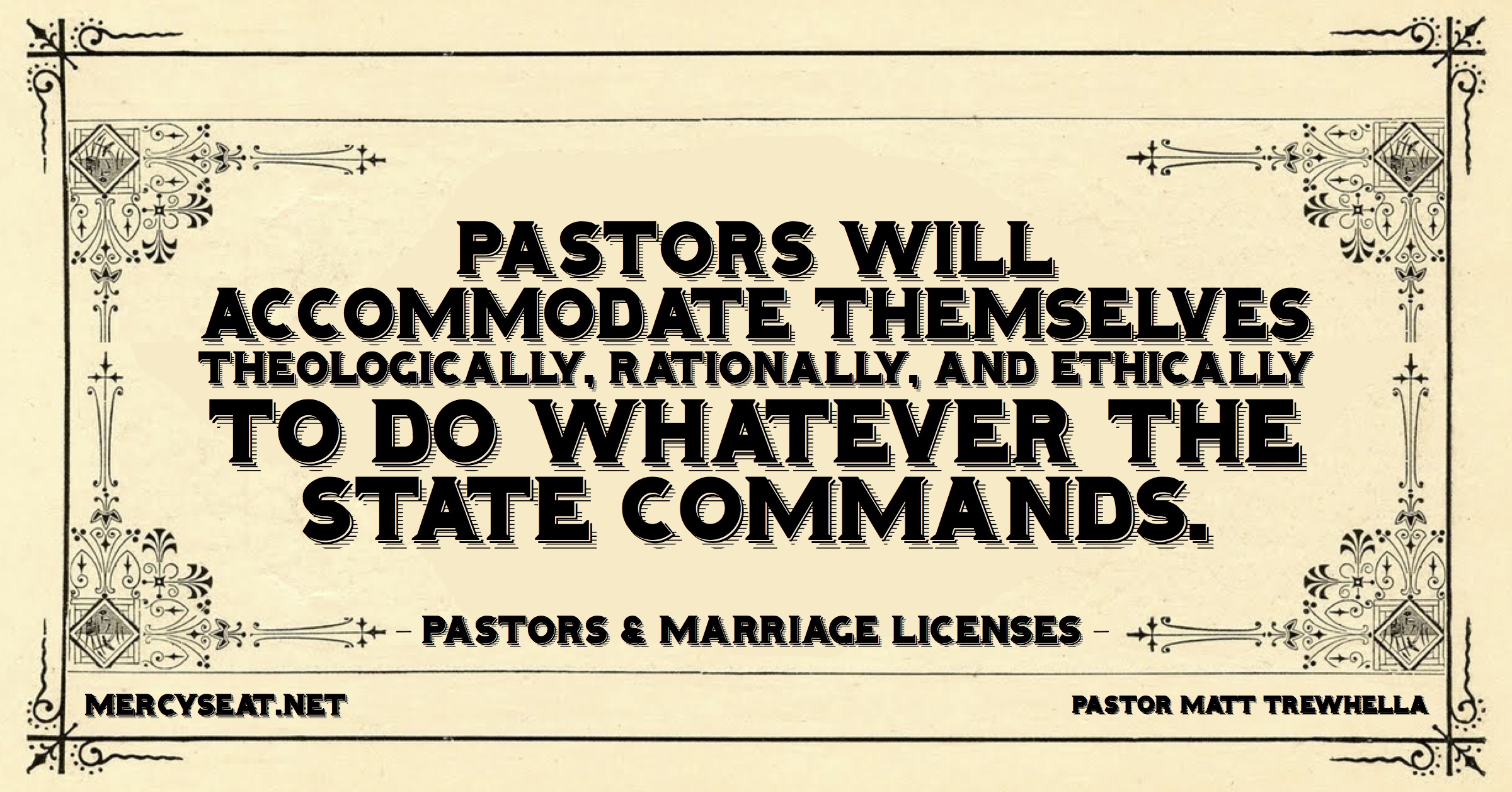 American Christianity has quietly, meekly, and wrongly – not to mention disgustingly – gone along with homosex marriage. I have heard from countless couples over the last year who have been told by their pastor or other church leaders that “unless you get a state marriage license to marry, you are living in sin.”

And this brings us to the answer of the question posed above. The reason pastors tell their congregants to get marriage licenses is because they are truly Statists. They will accommodate themselves theologically, rationally, and ethically to do whatever the State commands.

If I may, pastors in America are statist whores. If the State says jump, they simply ask “how high?” If the State told them to march their congregation over the edge of a cliff, their only concern would be if the Supreme Court had affirmed the law and all the paperwork was in order.

The whole nation benefited from their willingness to suffer at the hands of the State or be inconvenienced by it.

Now, the new ethic seems to be figuring out how to spread their legs wider to accommodate the ever-growing immoral and unjust actions of the State. The main concern is protecting themselves. Remaining comfortable. Not sacrificing or being inconvenienced.

The Lord addressed such whoredom through the prophet Ezekiel this way:

“Then the Babylonians came to her, into the bed of love,
And they defiled her with their immorality;
So she was defiled by them, and alienated herself from them.
She revealed her harlotry and uncovered her nakedness.
Then I alienated Myself from her.” (Ez. 23:17,18)

I attended a prominent scholarly evangelical gathering several months ago where they at least addressed this matter of marriage licenses from the State. The conclusions they proffered were troubling though.

Their main concern was pastors sullying their hands by being part of licenses that two men or two women can get. Their solution was to adopt the European form of marriage – where one gets married twice – once at church and once at court. This way the pastors wouldn’t be involved in marriage licenses.

The whole time I sat stunned; thinking, so you (pastors) don’t want your hands sullied by such licenses, but you have no problem throwing your congregants to the filth by making them obtain the very piece of paper you wish to avoid?

Sadly, here is an opportunity to stand true to Christ in a practical way and pastors have instead decided to play the harlot.

Pastors could demonstrate to the world their love and fealty for Christ by refusing participation in the state marriage license process. Such action is important for demonstrating to the world that Christians are a set apart, distinct people.

As Peter wrote: “But you are a chosen race, a royal priesthood, a holy nation, a people for God’s own possession, so that you may proclaim the excellencies of Him who has called you out of darkness into His marvelous light.” (1 Peter 2:9)

When the Church stands for what is biblically right and in defense of God’s created order by refusing to go along with the immoral actions of the State regarding this matter of homosexual marriage, it exposes the State’s lawlessness for the insanity it is; helps men realize not all believe such nonsense; raises a standard so men know it is wrong; blunts the further denigration of marriage and family; and demonstrates love for Christ and neighbor.

Pastors should not be telling congregants that they are in sin if they don’t have a marriage license from the State, rather, they should be marrying couples without a state marriage license.

When the Church’s faithfulness to Christ causes confrontation with the State, the whole nation benefits from our willingness to suffer at the hands of the State or be inconvenienced by it because such faithfulness preserves righteousness and liberty in a nation. This is the history of the Church.

Matthew Trewhella is the pastor of Mercy Seat Christian Church (MercySeat.net).
He and his wife, Clara, have eleven children and reside in the Milwaukee, Wisconsin area. You can read some of his other writings on the state marriage license at http://mercyseat.net/2015/10/07/marriage-licenses/