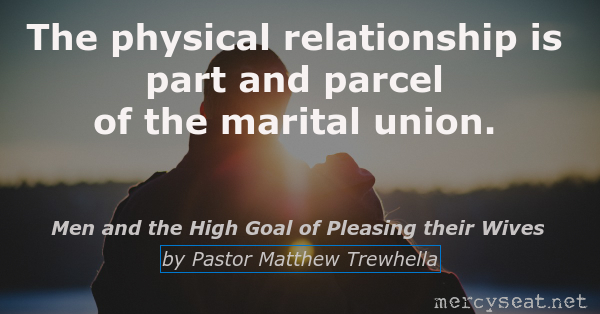 When I was a young minister doing pre-marital counseling with couples, I did not speak about sexual matters except to remind them of marital fidelity – that adultery is sin and is punishable under God’s law with the death penalty.

As I grew older, however, I began to realize I needed to say more.

Over the next twenty years, I counseled hundreds of couples with troubled marriages. I was surprised to learn that for about 25% of them their marriage problems were primarily due to sexual matters.

I also learned, that for most marriages, how the couple was doing together sexually was a barometer of sorts as to the health of the marriage in its entirety. In other words, how their marriage is doing is directly tied to how they are doing with each other sexually. Generally speaking, a problem marriage means less sex. A good marriage means more sex.

I was horrified to learn that sex once a month was common and sex once every six months was not uncommon  in problem marriages. I began to realize how much I could learn about the state of the marriage just by asking how they were doing intimately. It tends to act as an incredible gauge as to the direness of the situation.

As the years of counseling went by, I also fixed upon a common problem in troubled marriages, namely, the man had not learned how to please his wife sexually. I met plenty of men who had never pleased their wives in 10, 15, 20 or even 30 years of marriage.

Men often think they are doing well in this area of sexual intimacy and many women sit silent about their lack of fulfillment.

Men are easy to please – women not as much. Every study that has ever been done, shows this general rule to be true. Most women are wired different than men sexually and need time for things to build. They associate the whole act more emotionally. Hand-holding, attentive eye-contact, and saying nice things well before the time of intimacy goes a long way for a woman.

Men tend not to like to do what they are not good at and too many men are not good at sex. If a man does not learn how to please his wife sexually, he will put his time and energy elsewhere such as a hobby, some sport, overworking, or a host of other preferences. Bad priorities.

I tell men who have not learned how to please their wives physically to lock the bedroom door with the commitment not to come out until he has successfully pleased her. No matter how many hours it takes.

I encourage them to simply spend time with one another. This is the best way to learn what each other likes and plumb the depths of intimacy. You must talk with one another to discover what pleases.

Once they accomplish this – wow, what a transformation for them and for the woman. This is hugely important because it bonds the woman to the man. Scientific studies point to this fact. Things that were mountains of trouble in the marriage before – now become molehills. The couple finds it easier to overlook each other’s shortcomings.

Knowing how to please your wife is going to take some time, and perhaps even some study, to ascertain. Put long-protracted periods of time into pleasing her, and this will speak volumes to her heart of your love for her.

By the way, pornography is a destroyer of marriages. While the world preaches that pornography is harmless or even helpful, the reality is it proffers phony and false expectations, and ruins all that God intended for the marital relationship.

Do not touch it.

Matt Trewhella is pastor of Mercy Seat Church (MercySeat.net) and the founder of Missionaries to the Preborn (MissionariesToThePreborn.com).  He and his wife, Clara, have eleven children and reside in the Milwaukee, Wisconsin area.

This article is an extended discussion on part three of the article “3 Steps for Men to Repair, Restore, and Reform their Marriages” which can be found at MercySeat.net under the “Articles” button.