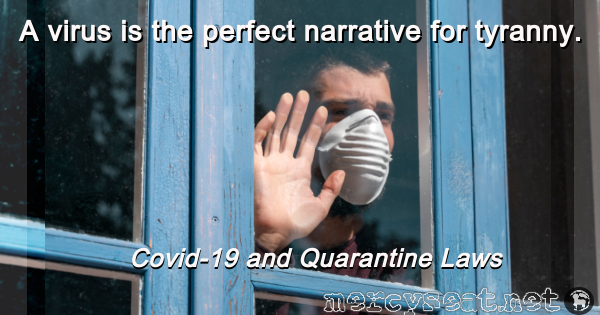 God’s Law: You Quarantine the sick – not all of Society

Notice also – under God’s law there was a process to determine whether the person was truly sick with a contagion. Notice it had to be proven a person was sick. If they were sick – then you separated them out – you quarantined them. Not the whole of society.  Verses 1-11 detail this verification process.

Notice also – under God’s law the rights and freedoms of the entire population are not abridged just because there is disease.

In this we see the goodness and grace of God’s law. God’s law is more gracious and protects freedom more than man’s law. You don’t abridge every other person’s freedom – you quarantine the sick. And those accused of being sick are given due process.

God’s law doesn’t destroy the economy and lives of others. God’s prescription was intended to protect society not only from the disease, but from economic hardship upon those who weren’t diseased.

God understands that a society’s needs are multi-dimensional. Due process for the accused – and you do not abridge the rights and freedom of everyone else and shut down the whole of society like we have done with COVID-19.

If things were noticeably terribly bad, people would themselves avoid public places – they wouldn’t need the government to tell them that. History has proven this is what mankind has done at such times of plague. The media and government has made COVID-19 to be some sort of plague – yet there is NO evidence for what they have portrayed the virus to be.

More detail is devoted to this law than any other law in all of God’s law. Why so much space devoted to the law of quarantine here in God’s Word? I believe it is – at least in part – because of fear. People fear contagion. People fear virus and disease.

We have learned in our current situation with COVID-19 that you can stampede an entire nation of people with a virus – and fear. Look at the hysteria they have created.

We know from history that disease, plague, sickness, contagions, and viruses – all produce fear. We also know from history that governments employ the use of fear for their own ends. And with COVID-19 you have the media and the government fomenting fear and hysteria. And that should concern you – because a virus is the perfect narrative to justify tyranny.

A virus is the perfect narrative for tyrants. We have many instances we know from history where viruses and plagues were used to demonize certain people groups. We even have a recent one we can point to when it came to the Nazi’s.

According to historian and author Alex Alvarez, the Nazis fostered conditions to portray Jews as natural disease carriers to justify their genocidal actions:

“Under the Nazis, this supposed connection between Jews and disease created the ideal situation for a self-fulfilling prophecy. The segregation of the Jews from the general population could be justified on the grounds of preventing the transmission of disease and once they had been crowded into ghettos and deprived of enough food and sanitation facilities, the outbreak of disease in these places was inevitable. The Nazis, however, attributed it to the Jewish propensity to carry disease, not the conditions in the ghetto. In short, the Nazis were able to portray their discriminatory and genocidal actions as necessary to maintain the health and welfare of German society.”

Jews were demonized for spreading disease, even though bad living conditions and sanitation were the main reason for outbreaks because they were rounded up and squeezed into ghettos.

We also had an example of government using fear to demonize a certain group of people just last year right here in America. Remember – it was just a year ago at this time that Congress held hearings about vaccinations and making them mandatory – in other words forced vaccinations through the arm of the state.

Remember this was because of the so-called measles epidemic last year which consisted of a measly (pun intended) 127 people from 10 states. The government held Congressional hearings over this meager situation. It became all the rage on Facebook for a few months. The press used it (as did many on FB) to demonize those opposed to some or all vaccinations, known as the anti-vaxxers.

This fear of disease and virus makes people run to get vaccinated and to have their children vaccinated. Big pharma, government officials, the media, and the pro-vaccination people all then demonize those who refuse vaccinations.

We learned from what happened a year ago that many people believe those who oppose vaccines should be arrested and their children seized from them. We learned many Christians believe that also (statists that they are!)!  You employ the fear to create a hysteria – and then you can accomplish what you want to get done. More statism. More control. More evil in our nation.

If you would like to hear a sermon on this topic entitled COVID-19 and the Quarantine Laws go to SermonAudio.com; click the “speaker” button the on the left; and type in “Trewhella”.

Matthew Trewhella is the pastor of Mercy Seat Christian Church (http://MercySeat.net) and author of the book The Doctrine of the Lesser Magistrates (http://DefyTyrants.com).  He and his wife Clara have eleven children and reside in the Milwaukee, Wisconsin area.