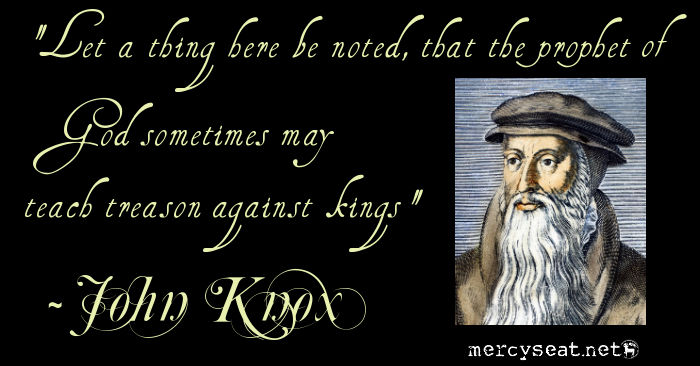 Quotes on tyranny by John Knox, John Calvin, the Apostles, and others.

“But hereof be assured, that all is not lawful nor just that is statute by civil laws; neither yet is everything sin before God, which ungodly persons allege to be treason.”

“Let a thing here be noted, that the prophet of God sometimes may teach treason against kings, and yet neither he nor such as obey the word, spoken in the Lord’s name by him, offend God.”

“For earthly princes lay aside their power when they rise up against God, and are unworthy to be reckoned among the number of mankind. We ought, rather, to spit upon their heads than to obey them.”

“If they (government authorities) command anything against Him (God), let it go unesteemed. And here let us not be concerned about all the dignity which the magistrates possess.”

(The Institution of the Christian Religion, written in 1536)

“If their princes exceed their bounds, Madam, it is no doubt that they may be resisted even by power.”

(while being questioned by Queen Mary about

his views which legitimized subjects resisting their princes)

“There is ever, and in all places, a mutual and reciprocal obligation between the people and the prince…If the prince fail in his promise, the people are exempt from obedience, the contract is made void, the rights of obligation of no force.”

“We ought to obey God rather than men.”

-The Apostle Peter and other apostles,

“Because the Hebrew women are not like the Egyptian women; for they are lively and give birth before the midwives come to them.”

“We shall not find any charge against this Daniel unless we find it against him concerning the law of his God.”

“Now when Daniel knew that the writing was signed, he went home. And in his upper room, with his windows open toward Jerusalem, he knelt down on his knees three times that day, and prayed and gave thanks to God, as was his custom since early days.”

“You are fools to make yourselves slaves to a piece of fat bacon, some hard-tack, and a little sugar and coffee.”

these were his words to fellow tribesmen

who went to the government Indian agencies

“I wish to be remembered that I was the last man of my tribe to surrender my rifle, and this day have given it to you.”

when he surrendered at Fort Buford in July of 1881