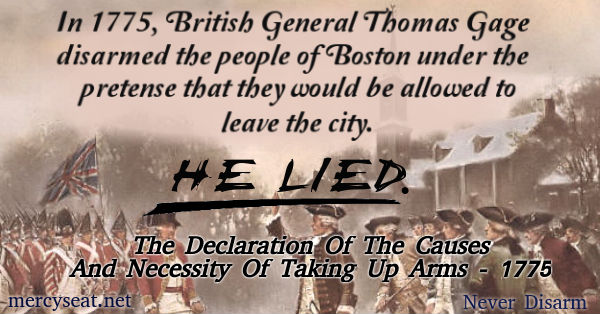 On April 27th, 1775, British General, Thomas Gage, disarmed the people of Boston under the pretense that, if they turned in their weapons, they would be allowed to leave the city. After collecting 1,778 muskets and 634 pistols, he did not allow them to leave anyway. The Declaration of Causes of Taking up Arms was written two months later by Thomas Jefferson and John Dickson. In it, they state regarding the Bostonians who disarmed, “They accordingly delivered up their arms; but in open violation of honor.”

Even after hostilities had broken out at Lexington on April 19, 1775, most of the colonists desired reconciliation with Great Britain and dreaded the prospect of a complete break from the empire. The Declaration of the Causes and Necessity of Taking up Arms held out hope of reconciliation, but at the same time approved the use of force to obtain recognition by Britain of colonial rights.

Pursuant to the resolution of the First Congress, delegates from the colonies met at Philadelphia on May 10, 1775. As had been true of the First Congress, many delegates were chosen by extra-legal assemblies. For this reason the membership of Congress, in general, was representative of the more radical elements of the colonies. Most of the members of the First Congress were also chosen for the Second. A few noteworthy additions to the body were made, however. These included John Hancock of Massachusetts, Benjamin Franklin and James Wilson of Pennsylvania, and Thomas Jefferson of Virginia. Some of the delegates were already on their way to Philadelphia when hostilities broke out at Lexington on April 19. The battles of the Revolution thus furnished the background of Congress’ deliberations.

Once Congress had assembled, the credentials of the delegates were presented. In general, the delegates were authorized to consent and agree to all measures which Congress might deem necessary for obtaining a redress of grievances and restoring harmony with Great Britain. In other words, the Second Continental Congress was to carry forward the objectives of the First. The credentials of the Massachusetts delegates, for example, provided:

That the proceedings of the American Continental Congress, held at Philadelphia, on the 5th day of September last, and reported by the honorable delegates from this colony, have, with the deliberation due to their high importance, been considered by us; and the American bill of rights, therein contained, appears to be formed with the greatest ability and judgment, to be founded on the immutable laws of nature and reason, the principles of the English constitution, and respective charters and constitutions of the colonies, and to be worthy of their most vigorous support, as essentially necessary to liberty; likewise the ruinous and iniquitous measures, which, in violation of these rights, at present convulse and threaten destruction to America, appear to be clearly pointed out,

The purpose of Congress was to seek reconciliation, not independence. The Massachusetts delegates were instructed to agree upon “such further measures, as shall to them appear to be best calculated for the recovery and establishment of American rights and liberties, and for restoring harmony between Great-Britain and the colonies.”

On June 23 Congress appointed a committee of five to draw a declaration to be proclaimed by General Washington upon his arrival at camp near Boston. The members of the committee were John Rutledge of South Carolina, William Livingston of New Jersey, Benjamin Franklin, John Jay of New York, and Thomas Johnson of Maryland. The committee’s draft was presented to Congress the next day. It was read and debated. On June 26, after further consideration, Congress sent back the declaration for revision. It was clear that Congress was dissatisfied with the committee’s efforts. John Dickinson of Pennsylvania and Thomas Jefferson were added to the committee, apparently in the belief that they could be trusted to express the sentiments of Congress in appropriate language. At the request of the committee, Jefferson prepared a draft. Dickinson thought that some of Jefferson’s language was too strong. At Jefferson’s request, Dickinson prepared an entirely new statement, preserving, however, the last four and one-half paragraphs of Jefferson’s draft. This draft was approved without change by Congress July 6.

The declaration expressly disavowed all thoughts of independence. Congress promised to lay down arms when the freedoms the colonists claimed as their birthright had been secured and hostilities had ceased.

Hope for a peaceful solution died slowly. The Association, adopted by the First Continental Congress, forced England to take the first steps. The non-importation agreement embodied in the Association caused a reduction of 90 per cent of imports from England. As a result, the merchants of London petitioned the House of Commons in January, 1775:

…the minds of his Majesty’s subjects in the British colonies have been greatly disquieted, a total stop is now put to the export trade with the greatest and most important part of North America, the public revenue is threatened with a large and fatal diminution, the petitioners with grievous distress, and thousands of industrious artificers and manufacturers with utter ruin; under these alarming circumstances, the petitioners receive no small comfort, from a persuasion that the representatives of the people, newly delegated to the most important of all trusts, will take the whole of these weighty matters into their most serious consideration; and therefore praying the House, that they will enter into a full and immediate examination of that system of commercial policy, which was formerly adopted, and uniformly maintained, to the happiness and advantage of both countries, and will apply such healing remedies as can alone restore and establish the commerce between Great Britain and her colonies on a permanent foundation…

On February 20 Lord North unexpectedly presented to the House of Commons a conciliatory resolution. North was willing to agree that if any colony should bear its share of the cost of defense, civil government, and administration of justice, Great Britain would not impose upon that colony any duty, tax, or assessment, “except only such Duties as it may be expedient to continue to levy or to impose for the regulation of commerce; the net produce of the Duties last mentioned to be carried to the account of such Province or Colony respectively.”

In May the New Jersey House of Assembly formally transmitted Lord North’s plan to Congress, stating that all proper means of effecting a reconciliation should be explored. In June the Virginia House of Burgesses, in a report drawn by Thomas Jefferson, rejected the plan. Immediately after completing this report, Jefferson went to take his seat in Congress. Lord North’s plan was not taken under consideration by Congress until July 22. On that date Franklin, Jefferson, John Adams of Massachusetts, and Richard Henry Lee of Virginia were appointed as a committee to consider the plan. Because Virginia’s report rejecting the plan was favored by Congress, Jefferson was called on to prepare the report of the committee.

The committee’s report was agreed to by Congress July 31. It stated, among other things:

We are of opinion that the proposition contained in this resolution is unreasonable and insidious: Unreasonable, because, if we declare we accede to it, we declare, without reservation, we will purchase the favour of parliament, not knowing at the same time at what price they will please to estimate their favour; it is insidious, because, individual colonies, having bid and bidden again, till they find the avidity of the seller too great for all their powers to satisfy; are then to return into opposition, divided from their sister colonies whom the minister will have previously detached by a grant of easier terms, or by an artful procrastination of a definitive answer.

Congress desired reconciliation, but on its own terms. Its most important effort to achieve that objective was the preparation of a petition to the king, known as the “Olive Branch” petition. That petition was agreed to July 5. It was drafted by Dickinson, leader of the party of conciliation. Couched in the most respectful language, it professed alarm at the “new system of statutes and regulations adopted for the administration of the colonies, that filled their minds with the most painful fears and jealousies.” No blame for the plight of the colonists was ascribed to George III. It was, instead, “the irksome variety of artifices, practised by many of your majesty’s ministers” that were responsible for colonial problems. The petition, together with other addresses adopted by Congress, was given to Richard Penn to be carried to England and presented to the king. On August 23, the day Penn was to have presented the petition to Lord Dartmouth, King George issued a proclamation of rebellion. He declared that the colonists had renounced their allegiance and had become traitors to the crown. The colonial representatives in England later requested an audience with the king. Their request was refused, and they were informed that no answer to the petition would be given.

Hope of reconciliation ended. It could no longer be expected that the force of arms would secure a recognition of the people’s rights while the colonies remained within the British Empire. Complete independence from Britain remained the only means of securing those rights.

Read the text of the Declaration here.