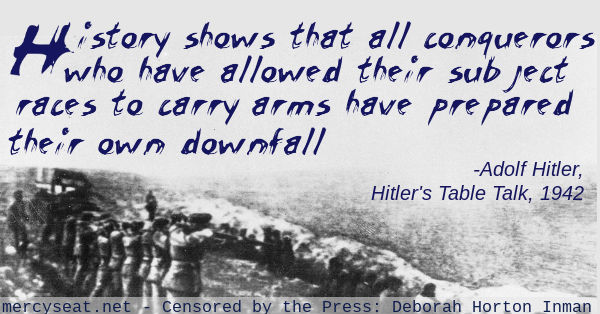 This article by Deborah Horton Inman, whose parents are Nazi holocaust survivors, is an excellent reminder that governments are not to be trusted. Her father relates to her the shocking story of the willing submission of German citizens to Nazi laws. These laws were incrementally placed upon the people of Germany. Will Americans be just as willing to submit to tyrants?

Say the name, “Gideon,” and most people probably think of the Gideon Bibles placed in hotel rooms around the world by The Gideon Society. When I hear the name, “Gideon,” I see scratchy old black-and-white film footage of shabbily dressed men and women. They are numbly walking through the ruins of post-World War II Europe with their hands behind their backs. I see scratchy old black-and white film footage of shabbily dressed men and women and children, recent immigrants, some of the all-too-few survivors of Nazi atrocities (a weak word but there is none better to use in English), walking down streets on the Lower East Side of New York City with their hands behind their backs. Even to this day, when watching news footage shot in Europe, you can still see elderly persons strolling leisurely down a restored boulevard. War scars are completely gone; all is peaceful as they stroll with their hands behind their backs.

My parents are Holocaust survivors. My sister and I were born in DP camps at the close of the war, with three brothers and another sister born in America after my family immigrated in the early fifties. Because of my background, I see events here differently from John Q. Public, who has been emasculated and fattened for the kill, to which he is apparently either blind or uncaring. Memories of what my parents endured only surfaced when my father became angry or disgusted with what he saw on television or heard on the news, but he always used those moments as opportunities to teach. A lesson I cannot forget centered on the hands in the news footage I just described. Here is the best translation (he spoke seven languages fluently) I can manage:

“When Hitler first came to power, he was afraid. So he took a list of everybody who had a gun. Then he was still afraid, so he made the people afraid. ‘Give me your guns and I will protect you,’ he said and the people listened. They gave him their guns and turned in anyone who wouldn’t cooperate. But Hitler was a small man and he was still afraid. He thought someone could still hurt him. He passed another law that said you couldn’t carry anything that could be a weapon, not even a pen… but that wasn’t enough because he had a lot of fear and thought that anybody could hide a weapon in their pocket and no one else would know. So he passed another law that said no one could walk down the street with their hands in their pockets, even in winter when it was very cold. But even that wasn’t enough– the next law he passed said that anyone walking down the street had to have their hands behind their back! That way, everyone was completely at the mercy of the police. (Expletive deleted), they already had their hands ready for the handcuffs.”

Now for those of you not Biblically literate, I will tell a very condensed version of Gideon’s story. The Lord wanted Gideon to lead any army against Israel’s current oppressors, but Gideon was loathe to leave his family-survival responsibilities and asked the Lord for a sign. He got his sign twice over and went on to recruit a large army of men willing to follow him. However, the Lord had Gideon cull his army: if anyone didn’t want to fight for any reason (afraid, etc.), they were told to leave. This still left too many men and the Lord had Gideon do one final culling. Gideon took the men to a stream and told them to drink. Almost every man knelt down and lapped water since they were used to worshipping their captors’ idols. Only 300 men bent down and scooped water up to their mouths with their hands. The Lord told Gideon those 300 men would be his army. Here is the parallel. Bowing down to lap the water and walking down a street with empty hands behind your back are both signs of submission.

America, the greatest country ever to have existed, is dead. It died when its people gave away their freedoms, one by one. In high school, (a long time ago-please forgive me as I cannot recall the source), I read that it only takes 1-1/2% of a population to control that population. With youthful arrogance, I thought that was impossible. Then I learned how it is done. There are really only two methods and they are extremely simple, either the water buffalo or the elephant. A six-year-old child in Burma can easily control a huge water buffalo because, when the buffalo is still just a weak calf, its sensitive, tender nose is pierced and an iron ring is inserted. Needless to say, where the nose is led, the water buffalo follows. The elephant, by contrast, actually trains itself. Days after birth, the elephant calf is tied by a rear leg with a heavy chain to a sturdy stake sunk deep into the ground. Of course, the calf tries constantly to free itself, but is unsuccessful. After enough time, the elephant calf learns the futility of struggling against the chain, at which point the trainer replaces the chain with mere rope. For the rest of its life, as long as the elephant feels even a piece of twine or string around its leg, it does not fight but obeys orders. As for myself, I have personally chosen not to be a water buffalo or elephant. To this day, I do not walk with my hands behind my back.