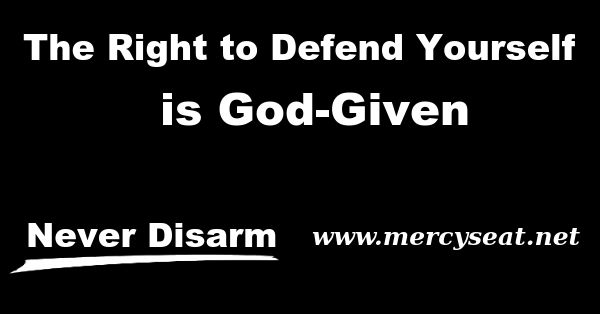 In the Spring of 2000, Mercy Seat Christian Church sponsored a Billboard Campaign focused on the 2nd Amendment of our Constitution: THE RIGHT TO KEEP AND BEAR ARMS.

We believe that God’s Word, the Bible, speaks to all matters of life. Therefore, we have a holy duty before God to declare the whole counsel of His Word.

Martin Luther once said, “If I profess with the loudest voice and the clearest exposition every portion of the truth of God, except that little point which the world and the devil are at that moment attacking, I am not confessing Christ, however boldly I may be professing Christ.”

Right now, many in the news media and Hollywood, and even many government officials, are trying to convince the American people that they should disarm, or at least register all those who have arms. This is a recipe for tyranny. You need to know history has proven that gun registration has always led to gun confiscation.

The Bible does speak regarding these matters.