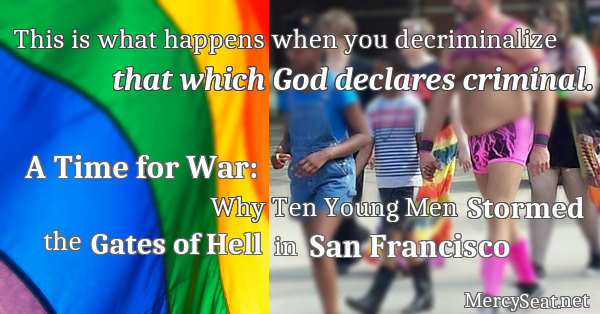 At long last we’ve finally found a bold lesser magistrate who is willing to oppose the higher magistrate. The only problem is – he’s wicked. Gavin Newsom, the Mayor of San Francisco, has decided to defy state law and issue state marriage licenses to sodomites. In just one week, over 6000 sodomites have obtained the licenses, including those who traveled to San Francisco from over 20 different states (in order to export this filth all across the nation).

While the news media, a host of politicians, and the sodomites themselves are portraying this attempt to legitimize perversion as a civil rights struggle, the Christian community has responded by filing two lawsuits to stop what is happening in San Francisco. But as for any action out on the streets of San Francisco or at the City Hall where the magistrates are spitting on God’s Law there has been nothing but deafening silence from the Christian community. That is – until yesterday.

Yesterday, Thursday, February 19th, after a week of sodomite-marriage-making and silence from the church, nine young men and four young women entered City Hall in San Francisco. They had had enough of this spitting on God’s Law going unanswered. The nine men brushed their way past a security officer, went straight to the head of the line of hundreds of sodomites waiting to “marry”, positioned themselves in the doorway and announced “O.K. folks, the show is over!”

This of course caused no small stir. Pushing and shoving ensued, but the young men held their position. They declared God’s Law and great Salvation and sang hymns while the sodomites wailed and the police and sheriff’s deputies ran upon them to put them in compliance holds and drag them away. This action was caught by news media – both local, national and international. The four young women also filmed and photographed the showdown.

Seven of the men were dragged through the building and thrown out a side door. The other two were taken to jail and charged with trespassing. But this is what is important – a standard has been raised in San Francisco around which men can rally.

Why the Silence and Why They did It

The reason for the silence out on the streets of San Francisco is because “the sodomites own the town” is what these young interposers of God’s Law were told. “You won’t come out alive” they were told. And surely these are not empty words. The sodomites in California have beaten up more than one streetpreacher, have firebombed numerous churches, taken over and vandalized others, and have even vandalized and burned government buildings while the police stand by and watch. So these were no empty words of warning indeed. These things are part of the cause for the silence from the Christian community out on the streets of San Francisco.

The situation reminds me of Kevin Costner’s movie – Open Range – which came out last fall. The townsfolk are being shoved around by bad guys and the local magistrate upholds the bad guys in their unjust deeds. In one scene, a guy named Mack Langley comments, “It’s a shame what this town has come to.” Charley Waite (played by Costner) tries to rally him and the other men standing around to action and says, “You could do something about it.” Langley responds, “What? We’re freighters. Ralph here’s a shopkeeper.” Waite retorts, “You’re men, ain’t you?” Langley declares, “I didn’t raise my boys just to see them killed.” Waite then, in double-edged sword fashion, replies – “Well, you may not know this, but there’s things that gnaw on a man worse than dying.”

Having to live in a culture which tolerates and upholds this kind of perversion is one of those things. That is why these young interposers did what they did at City Hall in San Francisco. This is why they were willing to go right into the beast’s lair and defy him. A standard has now been raised around which men can rally.

Chicago Next? The Associated Press reported on February 19th that Chicago officials are trying to build a “consensus” to begin doing what is being done in San Francisco. They reported Mayor Richard Daley of Chicago has “no problem” with issuing marriage licenses to gay couples. Daley tried to justify his perverted premise by declaring “they love each other just as much as anyone else.” He then went on to parrot the sodomite community and say “Marriage has been undermined by divorce, so don’t tell me about marriage” (as though two wrongs make a right).

County Clerk David Orr said, “I’m fed up with people being discriminated against because of their sexual orientation.” Well, let me tell you something Mr. Orr, there are many good men yet in this country who are fed up with having this onslaught of perversion shoved down our throats by the news media, Hollywood, and smarmy little politicians like you. We are raising our sons and daughters in this country, and we are willing to go to war over this matter in order to fulfill our God-given function as priest, provider, and protector.

I am 43 years old. I remember when the sodomites were saying how they just wanted to be tolerated. “What does it matter what two consenting adults do behind closed doors?” was their cry. We have since moved from tolerance and acceptance to where the sodomites are now demanding affirmation of their filthy lifestyles while they parade it about publicly. This is what happens when you decriminalize that which God declares criminal. The sodomites set forth the myth of neutrality and the Christians bought it. Now our children will have hell to pay because our generation spent its time chasing little white balls around on green fields.

If we can keep the courts from running roughshod over us like they did in Roe v. Wade by declaring a blanket edict for the entire nation, then we could end up with pro-sodomite states and anti-sodomy states. This will cause clear lines of demarcation. A precursor for any civil war. If not, and the courts do run roughshod, perhaps we will finally find our own bold lesser magistrate who will rebel over this matter and stand in defiance.

In Ecclesiastes 3:8, the Scripture declares “There is a time of war, and a time of peace.” This is no time to embrace the phantom of peace and appeasement. This is a time for war. And I for one, intend to rally with good men, and wage it.

The names of the ten young interposers of God’s Law at the San Francisco City Hall building are:

Jason Storms – a street/campus preacher who led the strike at City Hall, and heads up a A Call to Repentance Street Ministry (http://www.faithfulsoldier.com);

Keith Mason – whose love and devotion for the Lord and the preborn are renown and who heads up the pro-life group – Survivors;

Edmund Haroutonian – an Armenian of no small stature;

Jonathan O’ Toole – a valiant fighter for the preborn and God’s Law;

Gerald Fennell – a streetpreacher from Pennsylvania with a bold heart;

Nathan Euchinger – a young man on fire from Michigan.

The four young women who went in to video film are:

Sara Rzeznik – a friend visiting who is probably still wondering what she’s walked into;

Monica Lingsley – she’s a part of the pro-life group – Survivors.