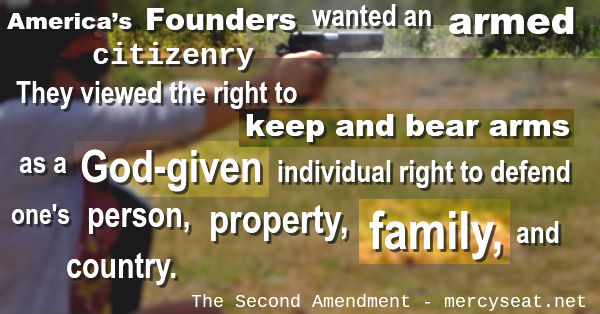 America’s Founders viewed the right to keep and bear arms as a God-given individual right to defend one’s person, family, property, and country.

They wanted an armed citizenry for three reasons:

Get the following books and learn the documented historical facts for yourself!

That Every Man Be Armed: The Evolution of a Constitutional Right

Written by Second Amendment attorney Stephen P. Halbrook, this book provides a definitive account of the individual right to keep and bear arms meaning of the Second Amendment. Must reading for those interested in defending our right to bear arms.

The Second Amendment Primer: A Citizen’s Guidebook to the History, Sources, and Authorities for the Constitutional Guarantee of the Right to Keep and Bear Arms

by Les Adams. Provides a citizen’s guide to the Second Amendment. It is a “primer” because it is elementary. Chronologically arranged, it traces the development of the right to keep and bear arms from its birth in ancient Greece to its addition in the U.S. Constitution. Supplemental essays discuss the Second Amendment’s interpretation in today’s world from the viewpoints of both firearms enthusiasts as well as those who would limit the amendment’s purview.

A Right to Bear Arms: State and Federal Bills of Rights and Constitutional Guarantees

After a fascinating first chapter on General Gage’s disarmament of Boston, Halbrook turns to a state-by-state analysis of the state Bills of Rights, half of which were adopted in 1776. Madison clearly had over a decade of development by the states to draw upon for his formulation of the federal Bill of Rights. Halbrook sifts newspaper and other data to show that the individual rights interpretation was not new with Madison.