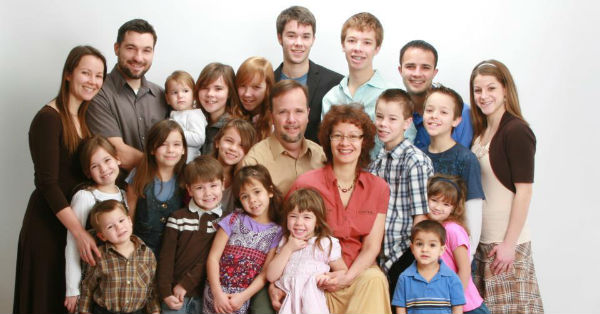 Recently, The Nation magazine, bastion of left-leaning drivel, wrote an attack piece against Christians who have large families. The article essentially declared that these large-family Christians are having many children for political reasons. Their aim was to warn the non-Christian world of this insidious behavior.

The truth is those of us with large families are not doing it for political reasons. As Christians we are a theologically-driven people and we simply see what the Scriptures plainly teach about family and children. What motivates us to have children, and be thankful to the Lord for lots of them, is Scripture itself.

One man mentioned in the article is Phillip Longman. Longman is a well-respected, world-renowned, demographer. He’s a secularist and a statist. He has written for the Council on Foreign Relations (CFR), an organization consisting of the cultural elitists of the world bent on implementing their statist social engineering plans through public policy. He was commissioned by the CFR to publish a paper addressing the plummeting birthrates in the industrialized and developing countries of the world. He had very sobering news for them – people who are religious and who take their religion seriously are outbreeding them.

In The Nation article, he states plainly that no society can survive to reproduce itself without following patriarchy. “As secular and libertarian elements in society fail to reproduce, people adhering to more traditional, patriarchal values inherit society by default,” he says.

Here’s a pagan who gets it. Just by doing the demographics of the entire world – this is the conclusion he comes to – no society can survive to reproduce itself without following patriarchal values, namely, a man and woman marrying and having large numbers of children.

In The Nation article, Longman states that the solution is for the secularists to emulate the Christians having large numbers of children by returning to patriarchy and having large families themselves.

Let me tell you – they’ll never do it. Their worldview cannot support such notions.

As Christians, we do not believe that our sons and daughters are a mere commodity that we can glibly pay someone $450.00 to exterminate. Rather, we view our children as precious because they are given to us by God. We do not view our children as mere products of random chance, as mere animals that evolved above the rest of the species, who exist merely for their own ends, designs, desires, and pleasures. Rather, we believe each of our sons and daughters were created according to the purpose of God in order to bring glory to Him and enjoy Him forever.

These are two huge presuppositional differences – that are worlds apart from each other. This is why they’ll never do it. Their worldview cannot support such notions of patriarchy. They’ll never have large families. Sadly, nor will the vast majority of present-day Christians who are hell-bent to emulate the world, and in the end, immolate their God-given purpose, heritage and created design. They’re simply too busy following the world’s preaching – pursuing wealth and ease – and having children hinders such goals.

As Christians, we have children because we see God’s created order declared in Scripture and we obey it; we live in fulfillment of it; we don’t try to circumvent it. We are a theologically-driven people. We conduct our lives in accordance with Holy Scripture. We do what we do based upon what the Word of God declares. We have children, even large numbers of them, because we have fealty to the Lord and His Word. Our worldview is shaped by Holy Scripture.

God’s Word makes it clear that God has a way different picture about children than the world does (or for that matter, the vast majority of American Christianity does). God doesn’t view children as a burden – He views them as a blessing. He wants us to have children, and when He gives us many we are to take it as being blessed of God, not burdened or beaten down by Him. Blessed is the man whose quiver is full of them! (Psalm 127)

All this – and piles more I didn’t mention from Scripture – causes us to desire to have children – as we see His view of them! As Christians, we have children because we see this created order declared in God’s Word and we obey it; we live in fulfillment of it; we don’t try to circumvent it. We are a theologically-driven people – or at least we’re suppose to be.

You can download a pdf of this article here.