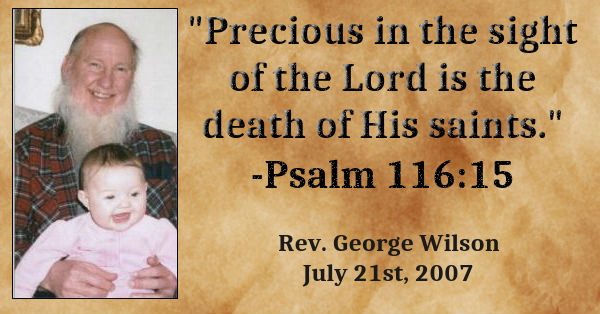 In the summer of 1992, George Wilson, an ordained Presbyterian (PCUSA) minister, attended the national General Assembly of that denomination which was held here in Milwaukee, Wisconsin. The denomination is pro-abortion, and he attended to speak up for the preborn with the hope of changing the wicked position of the denomination. His efforts did not have the desired effect, but while in Milwaukee he learned about Missionaries to the Preborn. He felt God’s calling on his heart; packed up his family and belongings in Pennsylvania, and moved to Milwaukee. He spent the next 15 years here ministering on behalf of the preborn.

On July 21st, George Wilson moved on yet again. He crossed over the river and met our Lord and Savior, Jesus Christ. George was one of the most kind and gracious men you would ever meet. His passion for the preborn will be sorely missed. He had 5 stents put in his heart over the last two years. “Precious in the sight of the Lord is the death of His saints.” -Psalm 116:15

There’s something to be said about a man finishing the race. I’ve known so many who have fallen by the way side; many who became consumed with the cares and riches of this life; or who’s Christianity has become a mere formality. George loved Jesus and he expressed his love for Him in both word and deed.

We at Missionaries to the Preborn lost one of our most seasoned veterans. Our hearts hurt deeply at our loss (his gain) of George. George was a great writer and thinker. He spent countless hours out at the deathcamps speaking and pleading for the preborn and righteousness. He spent nearly two years in jail while here for interposing at the doors of the deathcamps on their behalf.

George leaves behind his wife, Dianna; three daughters; two sons; and ten grandchildren. His love for his family was abundant. A past newsletter where he was writing about the birth of their first grandson expressed the conflict any good family man wrestles with in his heart: “Alex is both a reason for me to stay out of jail (I don’t want to miss seeing him grow up) and a reason to risk jail (I don’t want to see babies, just as precious as he is, ruthlessly executed).”

George had planned to travel with us on the Ohio State American Atrocities Tour which Missionaries to the Preborn conducted from July 30th to August 10th. His wife Dianna and son Andy came in his stead – portraits of love and courage.

If you would like to send Dianna and the family a card or gift – there is no life insurance as George and Dianna lived on a shoe-string budget in their service to Christ – you can contact Missionaries to the Preborn at 414-462-3399 or MissionariesToThePreborn.com