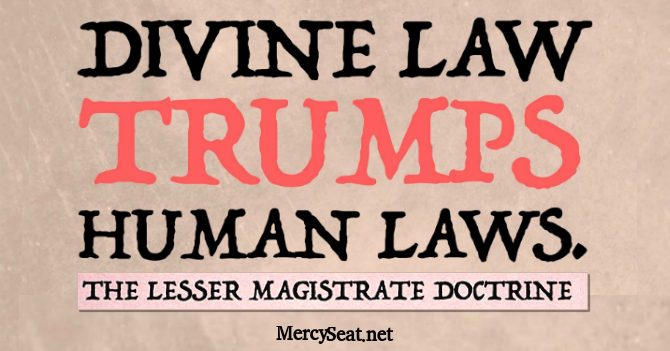 Many Americans seem to know that America’s founders gave us three boxes through which we can resist tyranny, namely – the ballot box, the jury box, and the cartridge box. But a lesser-known tool which the founders themselves employed is the lesser-magistrate doctrine.

Simply put, the lesser-magistrate doctrine declares that – when a magistrate, who is lower in authority than another higher authority, opposes and/or resists the unjust orders or laws of the higher authority.

For example, if Congress or the President makes an unjust or immoral edict, a state legislature or the governor could stand in defiance of their unjust edict and refuse to obey or implement it. They could in fact actively oppose it. Or for that matter, a city council or mayor could act in defiance or opposition of an unjust edict by a higher authority.

The lesser-magistrate doctrine became important to Christian men during the Reformation, though it had been spoken of and practiced prior to that by Christians. For example, the Magna Carta was written by a group of barons (lesser-magistrates) who had the tyrant King John of England sign it in the year 1215 at Runneymede, which is located southwest of London.

This great document which stands in defiance of tyranny and oppression by making clear that the State has limitations and that all are subject to the law – people and state officials alike – was penned by Christian men.

Calvin spoke of the lesser-magistrate doctrine in his Institutes of the Christian Religion. Amazingly, he did not appeal to Scripture in his support of it, rather he appealed to pagan historical examples. But other Reformers did give a Scriptural foundation to the doctrine.

John Knox for example, in his Appellation written to the nobles of Scotland in 1558, cites many passages to support the doctrine. Knox wrote his appellation (appeal) to the nobles because the Roman church had condemned him and burned him in effigy. He wrote to declare to the nobles, as lesser-magistrates, their responsibility in protecting the innocent and opposing those who had made unjust decrees.

Knox makes it clear that it is the duty of lesser-magistrates to resist the tyranny of chief magistrates when the chief magistrate exceeds his God-given authority or actually makes declarations which are in rebellion to the law of God.

He exhorts the nobles (lesser-magistrates) in his Appellation, “You are bound to correct and repress whatsoever you know him (the higher magistrate) to attempt expressly repugning to God’s word, honor, glory, or what you shall espy him to do against his subjects great or small.”

The lesser-magistrate doctrine had a huge impact upon the thinking of our founders, and upon our nation’s people regarding government and law. We however live in the midst of a statist, slave-like people where such thinking has long been forgotten. The magistrates themselves know nothing of this doctrine today because the pulpits have long been silent regarding it.

If ever this nation needs to understand the lesser-magistrate doctrine, it is now. Immoral and unjust edicts are commonplace. The preborn are being murdered, and sodomy is being proliferated. The assault upon our freedom and liberties is a daily undertaking by those in high office. The attacks upon the law of God are ferocious and relentless.

In our nation today, the State has declared good to be evil and evil to be good. The lesser-magistrate has a duty before God to uphold the good regardless of the new definitions created by the State.

We must remember that all authority is delegated. No man who holds State office rules autonomously. The authority he has is delegated to him by God. Hence, all those in positions of authority stand accountable to God. This is why the practice of the church historically has been – when the State commands that which God forbids or forbids that which God commands, we have a duty to obey God rather than man. The Bible clearly teaches this principle.

As our nation sinks more and more into rebellion and depravity, the lesser-magistrate doctrine needs to be taught more than ever. May the Lord grant us the strength and favor to do so.

For more information on the Lesser Magistrate Doctrine, including books, articles and audio, visit the web site LesserMagistrate.com.