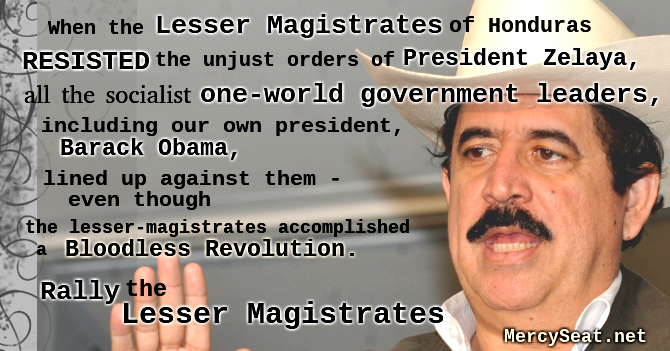 On June 28th, 2009, Honduran President, Jose Zelaya, was seized and shipped off to Costa Rica by Honduran military personnel. This was not a “military coup” as the press continues to report, however. Rather, this was the lawful action of lesser-magistrates against a tyrant who wanted to usurp the Honduran Constitution for his own dictatorial designs.

The lesser-magistrate doctrine declares that – when a magistrate, who is lower in authority than another higher authority, opposes and/or resists the unjust orders or laws of the higher authority, he is justified in doing so and his actions are morally right, proper, and legitimate.

In Honduras, the Senate, the Congress, the Attorney General, and the Supreme Court all took action as lesser-magistrates to resist the unjust orders of President Zelaya.

Here’s a brief summary of the facts leading up to the President’s removal (something you’ll never get from the socialist-loving American press):

When President Zelaya assumed power he swore, “I promise to be faithful to the Republic and to obey and make others obey the Constitution and the laws.” (Art. 322 of Honduran Constitution) Zelaya however, with his Council of Ministers (his Cabinet Council), emitted the Executive Decree PCM-005-2009 earlier this year which had the ultimate goal of summoning a National Constituent Assembly to make a new Constitution, which would allow the elimination of the “Articulos Petreos”, an act that is unconstitutional and is considered as a crime of “Treason to the Country.”

The President then, again with his Council of Ministers, emitted Executive Decree PCM-019-2009 which annulled the previous Executive Decree, and which ordered a national referendum would take place on Sunday, June 28, 2009, in which the following question would be asked: Are you in favor with the addition of a fourth voting box in the general elections of 2009, in which the people will decide on the summon of a National Constituent Assembly?

The Supreme Court ruled that the referendum violated the Constitution. President Zelaya moved forward anyway, and on June 24th he fired military General Romeo Vasquez when he refused Zelaya’s order to distribute ballots for the June 28th referendum. The Supreme Court ruled that Vasquez should be reinstated, but Zelaya refused, and proceeded with the illegal referendum. The Supreme Electoral Tribunal and the General Attorney of State began legal actions to confiscate the referendum’s material and named the Air Force Chief as depositary of the confiscated items.

The President and a mob of his followers however, broke the order of legality, rejected the resolution by the Judicial Power, and assaulted the Air Force facilities in Tegucigalpa where the confiscated material was being kept. Zelaya misused his authority as President of Honduras, publicly expressed that he would not respect the rulings of the Judicial Power, and put forward that the Legislative Power was not representative of the People, but himself, who had been elected president of Honduras.

A multi-party commission named by Congress to investigate the President concluded that Zelaya had violated Honduran law. That commission asked Congress to declare him unfit to govern and begin a legal process of impeachment.

The Honduran Senate passed a resolution declaring that the President had violated the Constitution on eighteen counts. It petitioned the Supreme Court to issue an arrest order to stop Zelaya from continuing with the violations.

The Armed Forces of Honduras was directed to seize Zelaya, and re-establish order and legality. The National Congress then followed the constitutional process established in Article 242 of the Honduran Constitution, regarding the succession of the President in case of a definite absence.

In conclusion, the Honduran lesser-magistrates simply took action against Zelaya’s tyranny, as they have a God-given duty to do. These lesser-magistrates accomplished a bloodless resolution, even though the leftists, socialists, and statists have done everything they can to cause bloodshed by their usual tactics of agitation, violence, masked faces, and intimidation.

All the socialists and one-world government leaders, including our own president, Barack Obama, have lined up against these lesser-magistrates. They are threatening them with economic destruction in an attempt to get them to capitulate their sovereignty and freedom. They want to make examples of them lest any other upstarts get the idea to preserve their Constitution and liberty from tyrants.

Though the whole world wants to ostracize these men, we should rally behind them. These lesser-magistrates are brave men who deserve our utmost respect and support. Let us remember to pray for them, and may they and the Honduran people who support them be examples to us all.