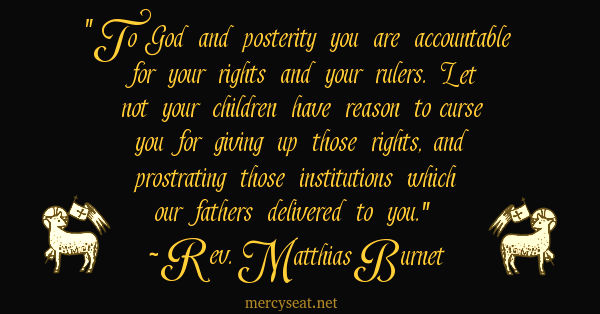 Martin Luther wrote in his day that “There are many who do not want to have children.” The desire to prevent offspring is nothing new. Man has always, because of self-centeredness and the pursuit of materialism and ease, viewed having many children as a burden, and a detriment to self-fulfillment. But if the conditions of Luther’s day caused him to commiserate, America’s situation today would have put him in a mental hospital with severe depression. Americans have taken what Luther observed in his day to a whole new level. American Christians eat birth control pills like candy while pastors peddle the anti-child mentality in their pre-marriage counseling with the glee of a Fuller Brush salesman.

This anti-child mentality does not bode well for the future of our nation.

I have eleven children; five sons and six daughters. As our numbers increased over the years, I noticed that I became more concerned about the public policies of our nation as the number of our children increased. Why? Because I have a lot invested in the future of our nation – eleven children I care about deeply. I will die, and what kind of nation will I leave my children to live in?

I find it interesting that the founding fathers of our nation (back when people were actually having children) had the following priority list – God, Country, Family. The priority list of most American Christians today is – God, Family, Church, Business. Country doesn’t even make the list of American Christians today. Why did the founding fathers (almost all of whom were Christians) put Country before Family? They did so because they knew if the country was sound, their families were safe.

When Christians abandon the arena of public policy, whose public policy do you think is going to rule? That’s right, the policies of wicked men. Our nation is no longer sound, and our families are less safe today precisely because of our neglect of public policy.

Rev. Matthias Burnet preached an election sermon at the statehouse in Hartford, Connecticut in 1803. Near the end of his sermon, to which all the elected officials listened, he looked up at the gallery filled with citizens, and declared to them, “To God and posterity you are accountable for your rights and your rulers. See that you preserve them inviolate and transmit them to posterity unimpaired. Let not your children have reason to curse you for giving up those rights, and prostrating those institutions which our fathers delivered to you.”

While Christians today are busy debating about whether or not they should involve themselves in public policy, or priding themselves in the fact that they don’t ‘dirty themselves’ by being involved in politics, or rejoicing over the demise of the nation in regards to how it plays out on their prophecy charts (they might want to talk to the Chinese Christians of the 1940’s), the Christians of Rev. Burnet’s era saw plainly that involvement in public policy was one’s responsibility and duty. Notice the generational outlook of these Christians. When reading their writings, you see they regularly appealed to “posterity” and “fathers.” The future of the nation mattered to them.

The truth is – men and women who have many children tend to view being involved in public policy matters as a no-brainer.

The latest Pew Poll results show that Americans now view the “importance of children to a marriage” at its lowest level in our nation’s history. The survey showed that, by a margin of 3 to 1, Americans say the main purpose of marriage is the “mutual happiness and fulfillment of the adults,” rather than the “bearing and raising of children.” The self-centered, anti-child mentality abounds in our nation. And as long as it does, the future for our nation looks bleak because the incentive to care about public policy is missing.