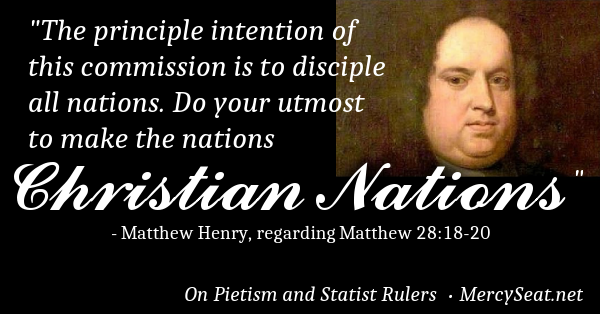 Why Rulers Promote a Pietistic Form of Christianity

Pietism was a movement which originated in the late 17th century. Pietists believe Christianity or God’s Law has no place for the governance of society. They view involvement in pubic policy matters to be “unspiritual.” They believe Christianity should be only a private and personal matter.

Pietism was developed amongst the Lutherans, impacted the Calvinists, and became prevalent amongst the Baptists. Pietism went on to infect every area of Christianity. Present day American Christianity is Pietism. So how did Pietism gain such a place of prominence throughout not only America, but all of Western Civilization?

Phillip Spener and August Francke of Germany were the founders of the Pietist Movement. Their teachings emphasized Christians being separate from the world, focused Christians on the inward and personal, and exhorted for the lessening of pastoral involvement in the debates over public policy. Their followers took things way beyond what they originally taught.

This new form of Christian religion quickly caught the eye of kings and rulers. Various kings and rulers immediately put Pietists in positions of influence, particularly in teaching positions in universities. They also financed and promoted this new religion throughout their empires. Frederick, King of Prussia, for example, installed Pietist teachers and financed its propagation. Unfortunately, Pietism even influenced the Prussian form of education he developed which went on to impact all of Western Civilization.

Sadly, most all of Christianity and Christians, both then and now, have embraced Pietistic thinking. So thoroughly have the Statists routed Christian thought, that most Christians now view the idea that Christ and His kingdom should impact the nations of the earth as a completely foreign idea, or worse, heretical.

The truth is however, the Scriptures make clear His Word and kingdom are to impact the nations of the earth. The early Church Fathers taught it as so. The Apologists addressed their writings to the magistrates of their days. And the early missionaries who went out to spread the Gospel, often went to the leaders of an area or nation first. Why? Because of what the Scriptures teach.

His Law, Word and Gospel were intended to impact all the nations of the earth. This is why Jesus said, “My house shall be called a house of prayer for all nations.” (Mk. 11:17) His final command was “Go therefore and make disciples of all nations.” (Mt.28:19) And Paul said his ministry was “for obedience to the faith among all nations.” (Rom.1:5)

This is why Christ is declared by John to be “the ruler over the kings of the earth.” (Rev.1:5) Contextually, this was declared to be so then when John wrote it, not to be applied off in the sweet bye and bye. Paul says of Christ “Who is the blessed and only Ruler, the King of kings and Lord of lords.” (I Tim.6:15) Paul uses the present tense, as there won’t be any kings or lords in heaven. In Psalm 2, a Messianic Psalm foretelling of Christ, the Father says to His Son in verse 8, “Ask of Me, and I will give you the nations for Your inheritance.”

Christian men down through church history understood that the rule of Christ extended to all the nations of the earth because of what the Scriptures declare. To think that the Law and Word of God would not impact nations was an absurdity to them. That is, until about 300 years ago, when Pietism came upon the stage of human history. The kings and rulers of the earth liked this form of Christianity because they could throw off the rule of Christ in their nations, and keep Christians marginalized in their “spiritual” ghettos.

Though most Christians today have embraced Pietistic thinking, true Christianity understands that Christ and His rule impact both the personal and the public. It is not an either/or. Though many are content with a Pietistic form of Christianity, there are many of us who recognize it for what it is – biblical imbalance.

God’s Law, Word and Gospel radically impact and transform the individual lives of men, and this translates into His rule and kingdom impacting nations. As Matthew Henry wrote in his Commentary regarding Matthew 28:18-20, “The principle intention of this commission is to disciple all nations. Do your utmost to make the nations Christian nations.”

A pdf of this article can be found here.