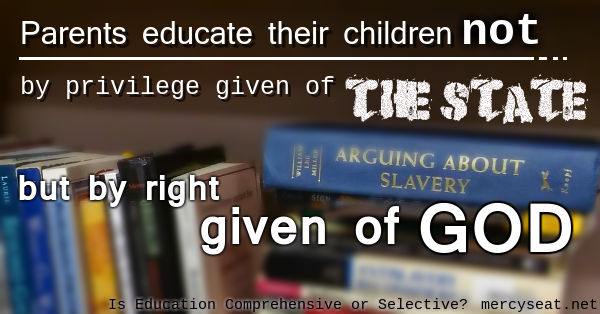 I spend much time out on university campuses preaching. I often have some of my children with me when I do so. The question always arises at some point – “Why aren‟t your kids in school?” I explain that we homeschool our children. This always results in the accusation that my wife and I – because we do not send our children to the government schools – are “brainwashing” our children.

My response to the students when they make this accusation is a question. I say to them, “Let me ask you – is education comprehensive or selective?” Almost always they have a look on their face which reveals they either cannot comprehend what I am saying or that this is a thought they have never pondered before in their lives.

I give them about ten seconds of silence and then I say to them, “I believe education is not comprehensive, but selective, and I‟ll tell you why. Just go to the library here on campus; walk in; look around; and realize, you could spend the rest of your life in this library and not be able to read all the books in just this one library, not to mention all the libraries of the world. Hence, education is not comprehensive, rather it is selective.”

For about 80% of the students, you can see a light go on. They had simply never thought of this before. I then go on to say, “Now the only question that remains is – who is going to select what my children learn? My wife and I believe we have a God-given right and responsibility to select what our children learn, not the State.”

Many students recognize my statements for what they are – sound reasoning – and they end up shaking my hand. Those committed to statist ideology however, have no appreciation for sound reasoning – only raw power and control.

“Parents educate their children not by privilege given of the State, but by right given of God.”

In a chilling ruling, which should cause every father in America to keep his powder dry, the California Appellate Court in February 2008, ruled that the State, not parents, have the right to select what children learn. And they‟re willing to use the coercive arm of the State to impose their beliefs, and criminalize parents. The Court ordered a homeschooling family to send their two children to attend a State school or a government-sanctioned private school, or “be subject to a criminal complaint against them, found guilty of an infraction, and subject to imposition of fines or an order to complete a parent education and counseling program.”

The truth is parents educate their children not by privilege given of the State, but by right given of God. The Scriptures always give matters of education to the jurisdiction of family government, never to civil government.

Why have the Courts taken this action in California? There are many removing their children from the State schools in California because of recent laws passed there by the legislature which requires schools to teach a positive portrayal of homosexuality, bisexuality, and transsexuality to the six million children in California‟s government-controlled school system starting at age five. This ruling by the Courts is a warning shot to encourage parents not to take their children out of the system. Because the vast majority of Christians have not held dear their right and responsibility to educate their children and have glibly handed them off to the State for years, unscrupulous men in positions of power feel emboldened to force children to be indoctrinated in their evil thinking.

Martin Luther once stated, “I am much afraid that schools will prove to be great gates of hell. I advise no one to place his child where the Scriptures do not reign paramount.” Luther‟s warning has proved true. May Christians now heed his counsel and remove their children from the Christ-hating public school system.

Click here for a pdf version of this article.

You can listen to two sermons online which address this matter. The sermons are Education: State v. Parents and Ten Reasons Not to Send Your Children to the State Schools.