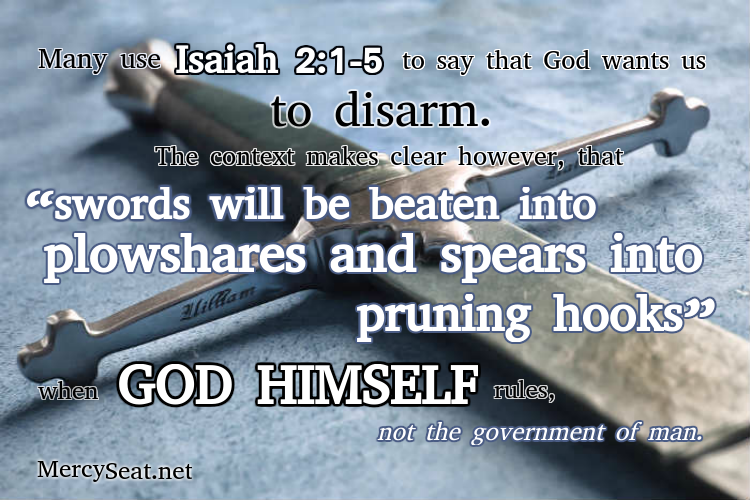 Genesis 4:8-12 In this passage, Scripture records the first murder wherein Cain killed Abel. That Cain must have used some sort of weapon to kill Abel is evidenced by the fact that Abel was bleeding (he was not strangled). Notice how God responded to the killing. He did not institute some sort of weapon-control, rather, He punished the one who committed the crime.

Exodus 20 and following In His holy Law, which God decreed at Sinai, nowhere do you see God outlawing weapons in regards to the various crimes which He prohibited in His legislation. He always punishes the perpetrator. He never disarms the citizenry.

Exodus 22:2 In this verse, God declares that if someone breaks into your house at night and you kill him, you are not guilty of murder. This verse makes clear that you have a God-given right to defend yourself and to defend your family.

Deuteronomy 22:23-27 This passage deals with rape. Notice that verse 27 ends with the words “but there was no one to save her.” What is the implication of such a statement? The implication is that had someone been around to hear her cry out, they had a moral duty to intervene and protect her from being raped. To stand by would be immoral. We have a God-given right to defend not only ourselves, but also others.

Numbers 1 In His economy, God instituted an armed citizenry, not a standing army, in order to deal with the affairs of war regarding Israel. This is what the Founding Fathers of America envisioned for our nation. Even in Switzerland today, every home is furnished with a machine gun (one of the reasons Hitler chose not to invade Switzerland).

Isaiah 2:1-5 Many, including the United Nations, take the latter part of verse 4 in this passage, which states “they shall beat their swords into plowshares, and their spears into pruning hooks,” and try to say that God wants us to disarm. The context makes clear however, that “swords will be beaten into plowshares and spears into pruning hooks” when God Himself rules, not when the United Nations or any other government of man rules.

Matthew 5:38-39 In this passage, Jesus is not denigrating the Law of God in regards to one’s right to defend himself and others, rather He is repudiating the lex talionis – the law of retaliation, which said, “if someone messes you up today, you go back and mess him up five times worse tomorrow.” The Pharisees were even using the Law of God to justify this mindset. Jesus is repudiating this personal vengeance which some sought to justify and participate in. He is not saying we cannot defend ourselves or others.

Vengeance belongs to God (Romans 12:19; Deuteronomy 32:35; Proverbs 20:22). We are not to avenge ourselves. If we see someone who needs our help during the commission of a crime, we have a God-given right and duty to intervene. If however, the crime has been committed (past tense), we have no God-given right or duty to go and execute judgment upon the perpetrator. God will avenge. God will judge.

God has given the sword (a symbol of judgment) to the civil magistrate (Romans 13:4). If a crime has been committed, it is to be reported to the civil authorities and they have a God-given right and duty before God to execute judgment.

Matthew 26:51-52 Some try to say that this passage proves that Jesus was a pacifist and against guns. Quite the contrary. Where does Jesus tell Peter to put his sword? “In its place.” John makes it clearer, Jesus said to Peter “Put your sword into the sheath” (John 18:11). Jesus didn’t tell him to melt it down into a plowshare, rather he told him to put it “into the sheath.” The sword has its proper place. It’s not evil. But Peter was wanting to use it in an improper situation. Jesus came to earth to die. Peter would be abrogating the purposes of God if he intervened with the sword. As Jesus goes on to say in verse 11 of John chapter 18, “Shall I not drink the cup which My Father has given Me?” Jesus was trying to teach His disciples that His Kingdom is not expanded in the earth through the use of force, rather it is expanded through the preaching of the Gospel and the discipling of the nations.

If someone wants to live by the sword, they will die by the sword, as Jesus says. In other words, he who uses the sword for improper purposes will die by it. It was improper for Peter to have used it in that situation. A criminal or a tyrant who uses the sword improperly will rightly die by it. But the use of the sword in a proper fashion, to defend one’s person or one’s family or one’s country, is not condemned by Scripture, rather Scripture upholds it.

God is not a pacifist. Jesus is not a pacifist. As Jesus said in the very next verse, verse 53, “Or do you not think that I cannot now pray to My Father, and He will provide Me with more than twelve legions of angels?” Jesus could have used force. The use of force; the use of swords were simply improper for the situation in which Christ was involved. He was suppose to die. He and the Father are not pacifists. He did not use force because He had to drink the cup of the Father.

Exodus 15:3 This verse of Scripture declares the Lord to be a “man of war.” That God is not a pacifist is evidenced throughout Scripture. Even Jesus Himself, who is the brightness of God’s glory and the express image of His person, and who has declared all that God is (Hebrews 1:3; John 1:18), drove the moneychangers out of the temple with a whip and overturned their tables (John 2:15). The book of Revelation defines Him as a King who does what? “Judges and makes war” (Revelation 19:11). The Scripture declares that Jesus Christ is “the same yesterday, today, and forever” (Hebrews 13:8). God’s character does not change. God is not a pacifist.

Just because we have a lock on our door or a gun in our closet does not mean we are trusting in them to protect us with the same trust with which we’re to trust the Lord.

Rather, we simply see the wisdom and prudence of having such things in order to be good stewards in protecting our belongings and our families.

The psalmist understood that there was no contradiction. The psalmist (David) who said in verse one of Psalm 144 “Blessed be the Lord my Rock, Who trains my hands for war, and my fingers for battle” said in verse two of Psalm 144 “My lovingkindness and my fortress, My high tower and my deliverer, My shield and the one in whom I take refuge.”