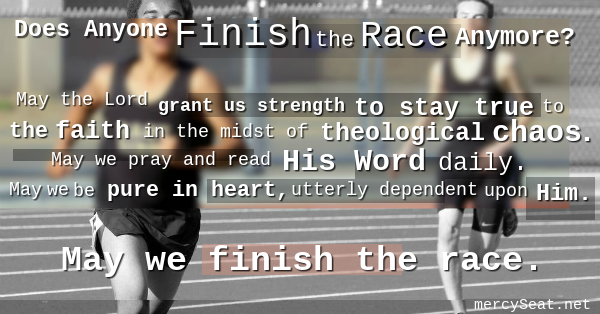 Ed Dobson, pastor emeritus of the mega-Calvary Church in Grand Rapids, Michigan, is the latest older Christian man I have watched apostatize. This past weekend, on January 4 th, 2009, Dobson, with beaming face, proudly told the world on ABC’s Good Morning America that he voted for Barack Obama.

You can see the whole sorry affair here.

If you are not familiar with Ed Dobson, let me bring you up to speed. Dobson was one of the leaders of the Moral Majority back in the 1980’s. He and Jerry Falwell use to regularly visit Ronald Reagan at the White House at Reagan’s behest. He was also an associate pastor at Falwell’s Thomas Road Baptist Church. But in the late 1980’s, Dobson broke off from Falwell and the Moral Majority.

In 1993, Dobson wrote a book entitled Starting A Seeker Sensitive Service. Later in 1999, he co-authored a book with Cal Thomas entitled – Blinded By Might: Can the Religious Right Save America? – a retreatist work which encouraged Christians to have nothing to do with politics. Yet now here he is, telling the whole world he voted for Obama.

I have seen this with other Christian leaders who have become leftist in their political views. They call upon Christians to have nothing to do with politics, and then they involve themselves with politics – leftist politics.

Once when I was visiting at Biola University for a missions conference, Tony Campolo was the keynote speaker. I went and watched him spend his entire sermon trying to convince the 2000 students not to get involved in politics. He then invited any who might be interested in environmental concerns to a smaller meeting. I went to that also. At that meeting, which was attended by about 100 students, all of whom were gung-ho about the environment, he repeatedly encouraged them to join the Green Party, exhorting them regarding the impact they can have through political involvement.

Sadly, men like Dobson, Campolo, and their ilk are corrupting Christian young people. They target the young. This past May, Dobson was named Vice-President for Spiritual Formation at Cornerstone University in Grand Rapids, a once decent Christian college which has been looking back from the plow of late. Think how many lives he will corrupt. These are future Christian leaders.

And Dobson knows what he is doing. He stated at the press conference announcing his new position that “If we can get students deeply committed to following Jesus’ teaching, we can probably change the world.” We already know what Dobson’s views of “Jesus’ teaching” are – hence his vote for Barack Obama.

He went on to say “I thought, ‘I can do six other things or I can do this one thing.’ Long term, I think the greater impact is in doing this one thing.” He knows exactly what he wants to accomplish, and it doesn’t bode well for the future of Christianity in America.

Because of his political and religious views, Good Morning America finds Dobson to be a useful idiot. The only reason they had him on was because he was connecting Obama with Jesus and Christianity in a positive light. Dobson’s actions are indicative of an American Christianity consumed with being accepted of the world and accommodating itself to the world. A Christianity more interested in being the sugar of the earth, rather than the salt of the earth.

Dobson is one of the chief architects of the pathetic state of American Christianity. His book Starting a Seeker Sensitive Service was a groundbreaking piece for the modern seeker-sensitive church movement. The church he pastored, Calvary Chapel, helped plant nearby Mars Hill Church, and Rob Bell studied under Dobson and ministered at his church. And Christianity Today, a purveyor of pathetic American Christianity, which has been in a love-affair with Dobson since his political views changed, has even rewarded him with Advisory Editor status.

This isn’t just about politics, however. This has to do with our faith. When a Christian leader boasts about voting for Barack Obama he has apostatized. Christianity opposes the killing of the preborn and the legitimizing of sodomy. Always has. As a student of church history, I can assure you American Christianity is an aberration, it is not the real deal.

As an older man now, I stand and look at the state of American Christianity and think – what happened? What I see is apostasy. Rampant apostasy. So many who once walked with the Lord and whose dear love for Him was so evident have gone off course. Many are living in outright sin. Many others are just going through the outward religious motions, but there is no heartfelt desire or love for God left. I’m often left thinking – does anyone finish the race anymore?

Recently, I informed our congregation about the death of Robert Eckhardt. He was 82. Brother Eckhardt was a former streetpreacher who spent the last 10 years of his life in a nursing home. He did finish the race. He contacted me about four years ago. We would talk from time to time. He loved our ministry and you could tell longed to be out on the streets again. It was as God intended, an older man giving encouragement and wisdom to a younger man. But I had to confess to the congregation, that for this one Robert Eckhardt who has finished the race, I can give you the names of a hundred people who have not.

May the Lord grant us strength to stay true to the faith even in the midst of such theological chaos. May we pray and read His Word daily. May we keep ourselves pure in heart and our faces low to the ground, utterly dependent upon Him. May we finish the race.