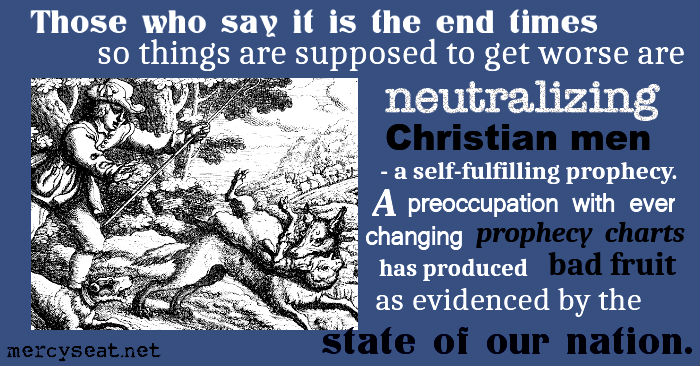 Having been a pastor for over 25 years now, I write out of a deep concern over the state of the Church in America. If one was to look at Bunyan’s Pilgrim’s Progress, the Church in America today is stuck in Vanity Fair. There is a perpetual pursuit by American Christians for personal peace and prosperity. Comfort and ease reigns.

I see no heartfelt desire amongst Christians to serve Him, and see His kingdom expanded in the earth (Lk.13:18-20). There seems to be no desire to truly follow Christ or glorify His name. We seem to have forgotten that Jesus said, “Whoever desires to come after Me, let him deny himself, and take up his cross, and follow Me.” (Mk.8:34)

I have noticed over my years that one massive contributor to this lackluster desire to serve Christ and see His kingdom expanded in the earth is the popularly held eschatological belief that Jesus is coming back any day now.

Last week I had a conversation that I have had or listened to thousands of times in the past. A woman, who recently came out of the slumber which grips the American Church, called me to tell me how much trouble she is having getting people involved to take action against legislation which is a clear attack upon the law of God and family government.

I responded by telling her that the Chinese Christians thought the same thing when Mao Tse-tung was coming to power in the late 1940’s. They stood by and did nothing because they thought it meant the end times with Jesus coming back any day. They were wrong. The utter persecution they suffered afterwards is well preserved in history.

They learned the hard way that God doesn’t fly a Chinese flag in heaven. They thought for sure that Jesus had to be returning because things were getting worse in their country. They paid dearly for their egocentrism and their faulty eschatology.

Nor does God fly an American flag in heaven. Just because things are getting worse in America doesn’t mean that Jesus has to be returning any day now.

What about all the countries where God’s kingdom is growing and expanding? Countries in Africa, South America, and even some places in Asia have seen thousands upon thousands won to Christ over the last decades. Many of these countries are even embracing the moral law of God for the legislative law of their land. What about them?

What? Jesus has to return just because things are getting worse in America? Our egocentrism and faulty eschatology has blinded us, just as it did the Chinese Christians of the 1940’s.

Think of this – in 1900 only 10% of the population in Africa was Christian. Today, it is 48%! Nations like Zambia, Zimbabwe, Sudan, Ethiopia, Nigeria and Uganda have seen spectacular growth. The Church in Africa is alive with a strong commitment to Christ and righteousness. They – who once had missionaries coming to them – are now sending missionaries out around the world!

But Jesus has to return just because things are getting worse in America?

Those who say it is the end times so things are suppose to get worse, neutralize Christian men, and it becomes a self-fulfilling prophecy. The preoccupation with ever-changing prophecy charts by Christians in America has produced bad fruit which is evidenced by the state of our nation.

Unfortunately when it comes to the Church in America, all His ambassadors and soldiers have left the field of battle having been neutralized by the faulty idea of present-day, popular, ever-changing eschatological schemes.