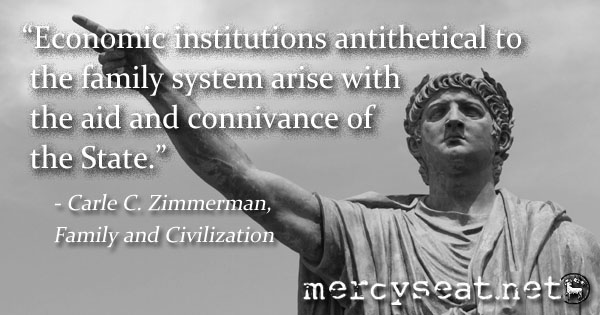 In 1947, Carle Zimmerman published his magnum opus — Family and Civilization — wherein he predicted that America would soon see divorce for any reason or no reason at all, legalized abortion, and rampant homosexuality. The renowned sociologist came to his conclusions by examining the Greek and Roman civilizations.

Zimmerman attributed the corruption of the citizens to the decline of the family.  However, he details how forces “external” to the family brought about the demise of family.  Specifically, he points to the changes in law and economics by the governments. These changes increased dependency upon the State for one’s well-being.

Zimmerman writes, “Economic institutions antithetical [directly opposed] to the family system arise with the aid and connivance of the State.” The changes in laws and policies by the government “made childlessness popular, divorce frequent.”

Every good Statist understands that in order to strengthen the State, you have to weaken the family.

E. Michael Jones also exposes the influence governments have in corrupting the morals of people. In his book, Libido Dominandi: Sexual Liberation and Political Control, Jones exhaustively documents how governments have been promoting sexual licentiousness through law since the French Revolution era.

He reveals that governments have a vested interest in legalizing sexual licentiousness because governments have learned that a more sexually licentious people makes for a more easily controlled people politically.  Jones states, “A man has as many masters as he has vices. By promoting vice, the regime promotes slavery, which can be fashioned into a form of political control.”

The political control includes a lack of interest in politics.  A people consumed with their next quest to gratify themselves sexually is a people less interested in what the government is doing in its public-policy making. The people have no interest in freedom or liberty. In fact, the people actually redefine freedom and liberty in their minds. The only freedom and liberty they are interested in is that their particular brand of sexual license is legal and not punished by the State.

Aldous Huxley, in his insightful work, Brave New World, also understood this about governments when he pointed out: “As political and economic freedom diminishes, sexual freedom tends compensatingly to increase.”

And so are things here in America.  They have been busy making laws and policies to corrupt the morals of the citizens. We have a government that has been at war with Christ and the family for decades now.

Though I could write a book on the changes in law to weaken the family — let me simply note three well-known ones:  no-fault divorce, the decriminalization of adultery, and homosexual marriage. All are designed to demean and belittle marriage and destroy the cohesiveness of families.

All of these changes in law made by the government have resulted in corrupting the morals of the citizens.  Consider the three Zimmerman said were coming in 1947 and are now here:  no-fault divorce, legalized abortion, and rampant homosexuality.  Divorce has since risen precipitously; millions have been aborted rather than hundreds; and we now have a nation of young people who think sodomy is a civil right.

Zimmerman stated, “No great civilization has endured for any length of time without paying considerable attention to the organization, promulgation, and protection of the domestic family.” Even though government policy has the ability to so negatively decimate the family, Christians have done virtually nothing in that realm to promulgate and protect the family;  rather most have conformed and conducted their homes just like the Statists have designed through their public policy.

The wicked, fallen nature of man aids and abets their Statist designs.

Here in America you can follow the history of our law changing and you see that our government – particularly the federal realm (though the states have aided and abetted it all along the way) – has given the force of law behind the most base men amongst us for whatever era you look at. The succeeding generation accepts the changes in law as the status quo – and then further law changing is accomplished in their generation, and the culture descends further into moral chaos and injustice. The cycle continues to repeat itself. The worst of this social transformation over the last 60 years has been accomplished by the federal courts.

While Christians are busy priding themselves on not getting involved in politics, they fail to understand the huge impact that public policy has upon people — including their own families.

Christianity — God’s law and Word — offers proper governance for both civil government and family government. Christians need to write of (and live out) practical application of His law and Word to both the magistrates and to families.

America is now run by thugs. The Christian Church – most all Christians – have abandoned the domain of civil government (in fact, they’re busy feeling all “spiritual” for their indifference towards it). The result has been wicked men have filled the void. Their worldview is seen through law and public policy and it is destroying the nation. No – it is destroying all of the West.

Noah Webster, the original author of Webster’s Dictionary, did not see Christianity at antithesis to government. He stated in the preface of his 1828 dictionary: “In my view, the Christian religion is the most important and one of the first things in which all children, under a free government ought to be instructed… No truth is more evident to my mind than that the Christian religion must be the basis of any government intended to secure the rights and privileges of a free people.”

“When the righteous are in authority, the people rejoice; But when a wicked man rules, the people groan.”   -Proverbs 29:2.

Matthew Trewhella is the pastor of Mercy Seat Christian Church (MercySeat.net) and the founder of Missionaries to the Preborn (MissionariesToPreborn.com). He and his wife Clara have eleven children and reside in the Milwaukee, Wisconsin area. Matt has written a book entitled The Doctrine of the Lesser Magistrates: A Proper Response to Tyranny and A Repudiation of Unlimited Obedience to Civil Government which is available at LesserMagistrate.com or Amazon.com.