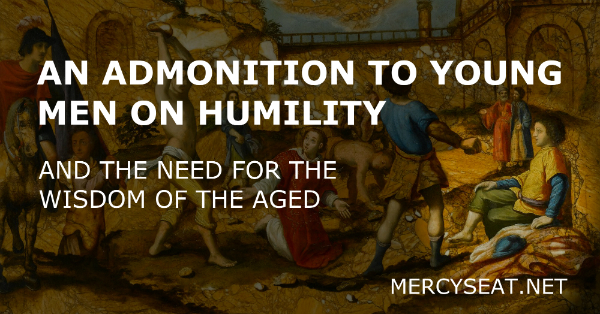 When giving guidelines for eldership the Apostle Paul admonishes the church not to elevate a “novice,” someone young and inexperienced. Those untested and underdeveloped in maturity and wisdom will, according to the Apostle, easily become “lifted up in pride” and “fall into the same condemnation as the devil.”

Young men desperately need the wisdom, temperance and guidance of older, more experienced men. This requires an unusual sort of humility from young men in our culture. Unusual in our day, though not historically. In most cultures and civilizations profound respect for older people was built into the DNA of society. From Native American tribes to ancient Chinese cultures, when an older man spoke the young men closed their mouths and listened with reverence. In ancient Israel, a recalcitrant youth could be stoned to death for dishonoring their parents.

Throughout most of human civilization, it was well understood that respect was owed to those older and wiser who have gone before, prepared the way, made the sacrifices and learned the difficult lessons that the younger have only begun to even think about.

My wife and I served in a Middle Eastern congregation for two years in Los Angeles while in our mid-twenties. Despite the Americanizing (and even worse, California-izing) of their youth, there still remained a substantial amount of respect demanded of them. Even the wildest and most Americanized young men I knew would never consider mocking an older person publicly. Yet this happens regularly in our society, and especially on social media, where pompous youth, sheltered from face to face interaction, can say the most disrespectful and smug things and never think twice about their behavior. Christian young men are no exception. “Being right” they feel gives them license to disrespect and hubris. American culture breeds such arrogance.

We are one of the only civilizations in recorded history where young people pervasively mock, mistreat, disrespect and disregard older people with impunity.  Youthful arrogance and the presumption of independence and autonomy amongst young people are deeply woven into the ethos of our entire culture.

Thus, we commonly see such things even in our churches and in our pulpits. Youth groups isolate and glorify youth culture as intentionally distinct from the adult world, and of course much cooler. Young men rapidly rise to positions of prominence and authority, climbing the religious corporate ladder. Integrity and tested character are often secondary to charisma, people skills or administrative talents and “working well with young people”. Direct mentorship over many years by seasoned men is often lacking. Paul’s admonition to not exalt a “novice” goes unheeded.

In the world of social media young men can easily prop themselves up as more than they are, jockeying for attention and notoriety. Our culture feeds narcissism and vanity in the most grotesque ways. Men can hide their faults and their flaws behind a computer screen.

Eventually, their immature character will collide with reality, even in social media. The damage that arrogant young men do to the body of Christ can be seen all around us. The wake of strife and contention trails behind them like toilet paper stuck to their shoes.

How easily young men can ridicule and disdain the failures of older men, while they themselves have accomplished a small fraction of what those same older men have accomplished. It’s easy to say, “I would have done it better,” when you haven’t actually done much of anything.

I have known so many young men who began a good work, inspired by some fresh insight and perspective, aggressively advanced by the boundless energy of youth, only to crash and burn, as the immaturities of these “leaders” were never tempered. Their early success spawned the destructive pride Paul warned of and their “ministry” collapsed under the weight of their own weaknesses.

I was raised without a father and was taught to be a smart mouth, to stand up to authority, to “fight for my rights.” When I became a Christian at age 19, God brought a great humbling to my soul. I quickly realized the importance of older men and the systems of authority that surrounded me, corrupt as so many of them had been throughout my life. More importantly, I saw the need for older men, possessed of integrity and virtue, to be guiding lights to my well-intentioned but youthful ignorance.

Anything human beings endeavor to do will be flawed. Pointing out those flaws makes you neither perfect nor a prophet. But it can make you a downright fool, depending on how you go about it.  Paul warned, “Do not entertain an accusation against an elder, except on the testimony of two or three witnesses.”

Life is hard. Men who have successfully managed to raise children, preserve their marriages and stay relatively faithful in the vocation God has called them to are deserving of much respect and appreciation, regardless of whatever flaws and failures may have come through their years of battle. One thing that is guaranteed, these men have accumulated wisdom. Life has a way of teaching us, of humbling us over time, breaking us of our fantasies of our own perfection or superiority over those who have come before us.

There is always the danger of older men losing their fight, adopting pragmatism and compromising their principles in ungodly ways, or of becoming too arrogant to take correction or alter the “way they have always done things.” This danger is why young insight, energy and zeal are always needed. And yes, at times even correction. Here Paul gives wise words, “Do not sharply rebuke an older man, but rather appeal to him as a father,”

Older mature men are supposed to lead. Not inexperienced novices. No matter how gifted and talented those novices may be. Such ambitious young men should cling to older men, serve under their covering, seek them for guidance, for wisdom and for strength to endure faithfully in this battle.

The Christian life is not a sprint. It is a marathon. If we are to see revival in our day, it will only come in proportion to the degree to which young men are adequately discipled into a mature walk with Christ, where servanthood, humility and virtue are paramount. This means older men need to learn how to mentor and invest in young men, as wise fathers, and good shepherds. But this also means younger men need to humbly seek out such mentorship, recognizing their deficiencies and their need for such wisdom they as of yet do not possess.

“Likewise you younger people, submit yourselves to your elders. Yes, all of you be submissive to one another, and be clothed with humility, for ‘God resists the proud, But gives grace to the humble.”   – 1 Peter 5:5